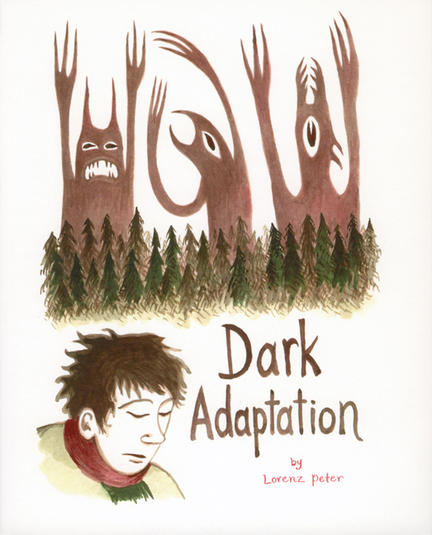 When someone close is dying of cancer and one's life is thrown into turmoil, past events, and memories of these events, can surface and sometimes direct the course of one's current life, bringing to light the worth of family and the parameters of love. In Dark Adaptation, the protaganist undertakes this journey, to make sense of the life he has already lived and the life he is now living. By Canada's underworld comix guru Lorenz Peter, whose first Pedlar Press title, Chaos Mission, was a great hit with readers 15 years of age and up.

LORENZ PETER grew up in northern Alberta in the early eighties. He attended Keyano College in 1990, studying painting & drawing, but soon abandoned the curriculum to embark on his own artistic journey. It was at this time that Peter began the Side Effect mini comic (1993). As an outlet for his own demons and as an anchor to keep his mind from floating directly to the moon, Peter’s energy was directed into the making of these fantasies, from which three graphic novels emerged - The Last Remaining Ancient Mellish Bird, Chaos Mission (Pedlar Press) and Dark Adaptation (Pedlar Press). Lorenz Peter lives with his partner Elie in the Annex area of Toronto. He is currently at work on a new graphic novel.

Other titles by Lorenz Peter