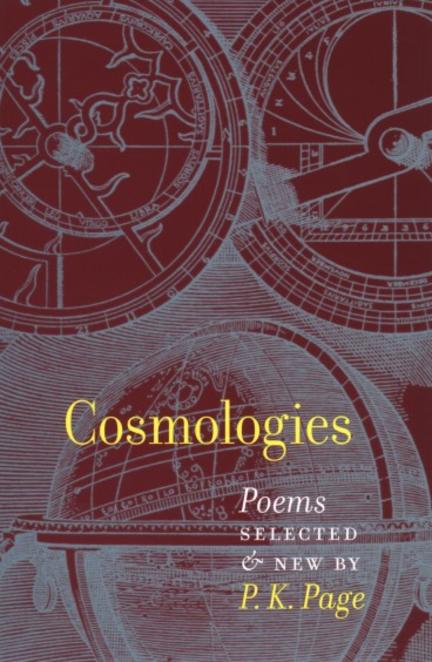 A collection of P. K. Page’s poems, socially conscious work that focuses on our planet and on the beauty of existence.
Shortlisted for the 2003 Griffin Award for Excellence in Poetry, Cosmologies is a careful distillation of Canadian poet P.K. Page’s critically acclaimed two-volume Hidden Room, and it is the first of her collections to be published in the United States. Anchored by a masterful use of metaphor, her poems quote knowingly from Eliot, Thomas, and Robert Graves. As editor Eric Ormsby says in his foreword, this “supreme escape artist of Canadian literature . . . is the shrewdest of observers . . . a citizen not only of the world but of the earth.”
“Elegant, rigorous, fresh,” the Griffin Prize, Judge’s Citation said. “P.K. Page’s work sings with a voice of independent character and maenad conjecture. It is a creature that lives on its own terms and terrain. It is startling, authoritative, and anti-sentimental, able to bear cool as well as passionate gazing at our own species. Her poems are always thinking – each line is thinking, while its six senses remain impeccably alert. Her poems live by wit, wisdom, sass, suspense and a muscular lissome synapse and diction. They are daring in scope, meticulous in accomplishment, and boldly moral – with a lovely flavour of amoral verve! We fall under the charm of her reasoning, of her fecund, fastidious imagination, of her many musics, and of her necessariness to us, her essentialness.”