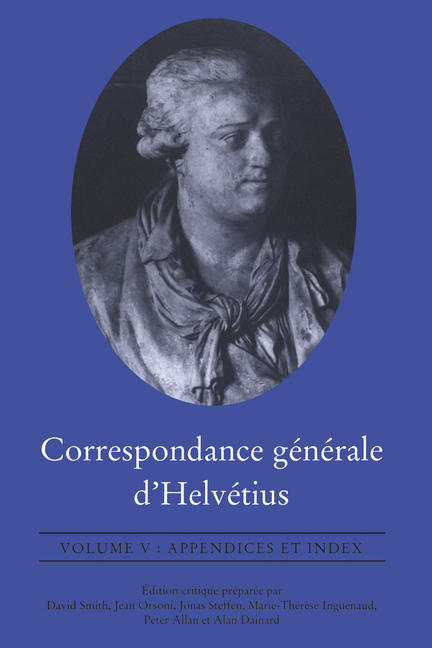 This fifth and final volume completes the critical edition of the letters of French philosopher Claude Adrien Helvétius (1715-1771), author of the controversial De l'Esprit (1758), and of his wife, née Anne Catherine de Ligniville (1722-1800), who ran her own salon in Auteuil after her husband's death. The essential component in this last volume is the detailed index – an indispensable instrument for researchers who wish to make full use of the correspondence. The volume also includes four new letters discovered since the appearance of the first four volumes, errata, additions and modifications to the critical apparatus, the text of letters excluded from the edition proper, genealogies of the families of Helvétius and his wife, and a chronological list of all letters mentioned in the edition.

The previous volumes of this edition have enjoyed international acclaim. "All students of the French Enlightenment will be deeply indebted to D.W. Smith and his team for this superbly conceived and organized collaborative achievement. When complete the Toronto Helvétius will rank among the truly outstanding examples of twentieth-century editorial and bibliographical scholarship." (David Williams, French Studies)

Jonas Steffen teaches at the University of Strasbourg (Robert Schuman).

Other titles by Alan Dainard