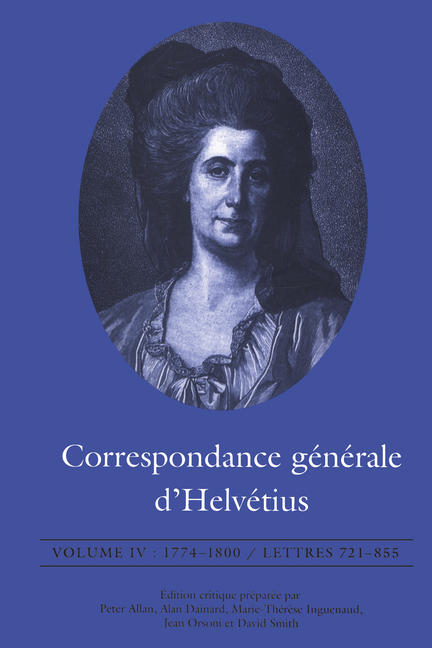 This is the fourth of five volumes of the letters of the French philosopher Claude Adrien Helvétius (1715-1771), author of the controversial De l'Esprit (1758). Featuring the correspondence of Mme Helvétius, née Anne Catherine de Ligniville (1722-1800), in the years following her husband's death, this volume also includes letters by and to Helvétius discovered since the publication of the first three volumes.

Mme Helvétius enjoyed an active widowhood, welcoming to her salon in Auteuil a group of intellectuals who came to be known as the Idéologues. A close friend of Benjamin Franklin, she was involved in political events before and during the French Revolution, as well as in Napoleon's coup d'état. In the last letter of the series her grandson describes her burial in her garden, which took place without religious or revolutionary ceremony in the presence of all her favourite pets.

Most of the newly discovered letters are addressed to Helvétius by figures as important as d'Alembert, Boulanger, Chastellux, Saint-Lambert, Servan, Thieriot, and Trublet. Some of these complete an existing exchange, others provide dates for letters already published.

The fifth and final volume will be devoted primarily to a comprehensive index. It will also include a chronological list of all the letters, corrections and modifications, and other useful material.

Other titles by J.A. Dainard