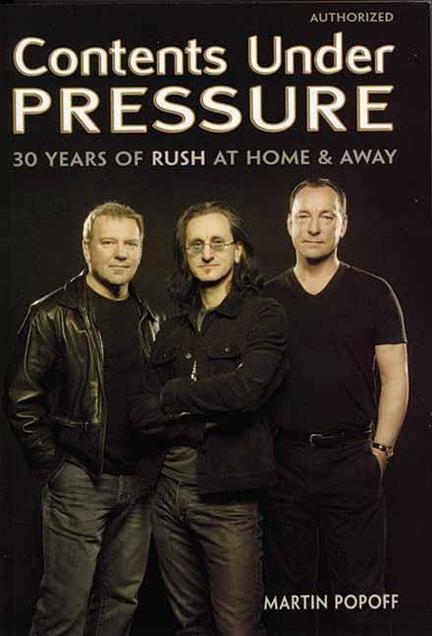 Contents Under Pressure: 30 Years of Rush at Home & Away is a detailed history of the exhaustive road experience of Canadian rock icons Rush. Celebrating the band’s 30th anniversary, By-Tour features in-depth original interviews with Geddy Lee, Alex Lifeson, and Neil Peart. Together, history’s loudest Order of Canada recipients conjure the sights and sounds of their strange journey: one that began in the microscopic, sometimes hostile clubs of Ontario and culminated in hockey barns, arenas, and stadiums all over the world. Rush have been headliners for over 20 years. The announcement of an impending Rush tour is major entertainment news all over the world, and a cause for celebration for the fanatical following the band has created with their grace, humour, intellect, focus, and spellbinding musicianship. A visitor to this book will be justly rewarded with fresh, exclusive insights about this enigmatic Canadian institution.

Martin Popoff is the author of approximately 90 books on music, including five previous titles on Rush. He has also worked on various documentaries for Banger Films, including the award-winning Rush movie, Beyond the Lighted Stage. Popoff has published approximately 7,900 record reviews in books — more than anybody in the history of music writing. He lives in Toronto, Ontario.

Excerpt: Contents Under Pressure: 30 Years of Rush at Home and Away (by (author) Martin Popoff)

The early history of what can arguably be called Rush is actually quite a long one, reaching back a good five years before that first wollopingly Zeppelinesque album on Moon Records. At times a four-piece with a revolving door of players, the band wouldn’t actually become something worthy of the tag “the grandfathers of progressive metal”(!) until well past Neil Peart’s arrival, until, that is, the three amigos committed their special purpose to wax with a little something called As alluded to in the introduction, this book is neither the time nor the place for a detailed history of the band, but it is indeed a celebration of the art, science and sheer luck of constructing records and playing live. In that spirit, I offer a few words from Alex Lifeson (born Alex Zivojinovich), Geddy Lee (born Gary Lee Weinrib) and Neil Peart (just born, but not really as a drummer — that took 13 years) on the formative years, when pushing air to small tribal gatherings was all they had to confirm their very existence.

“Well, let’s see, we started in September of ’68,” begins Alex. “We got a gig in a United Church basement where they had a drop-in center on Friday nights. We played this gig, and we knew maybe seven or eight songs — mostly Cream and Hendrix — and we would just play them over and over, repeatedly throughout the night. And through the rest of the week, we would get together and rehearse and learn more songs.

“We started writing right from the beginning; I think we wrote our first song within a few months. The first original song we wrote was called Losing You, and it was kind of an up-tempo bluesy thing.

“And we continued doing that gig pretty much on a weekly basis until the spring of 1969. The first gig we played there, there were probably 30 people. By that spring, there were about 200, 250 people. I mean, the place was packed! And we had two solid sets of material, and that was a real treat; it was so exciting.”

World domination was drafted, says Alex, shortly thereafter. “We got ten bucks to do that first gig. And we went to Pancers, a deli at Steeles and Bathurst; the gig was in that area, ten minutes from there. And we talked about, you know, what we were going to do now, where were we? [laughs]. At what level were we in the world of rock bands? We figured we were like number 10,680, even though we only knew a few songs [laughs]. But it was so exciting sitting in there. I can still visualize what the place looked like and the booth we were sitting in and how excited we were.

“And by the spring, we were getting 3 5 bucks a week to do that gig. So it was quite a big increase. And then we started playing high school dances, other drop-in centers, things like that. We continued doing that for the most part until ’71, I guess, when they lowered the drinking age to 18. And then all of a sudden there were all these bars you could play in.

“We went through some difficult periods. You know, John Rutsey [drummer on debut album and part of first tour] had some health issues. So there were a few times when things kind of just went into limbo. We had some changes in the lineup a couple of times. Joe Perna was the bass player for a little while; Geddy was gone for a bit, and then he came back. Geddy’s brother-in-law played in the band in the spring of ’69 for a few months, playing piano and guitar. We were still playing a lot of bluesy stuff. Mitch Bossi came later [lasting February to May of ’71 ]. But Lindy Young was in the band for a little while, and then he quit [Young was in from January to July ’69]. Mitch came in I think just as we were doing the bar gigs; he might have done a few of the bar gigs.”

Legend has it that Rutsey’s older brother just blurted out the name Rush one day, and it stuck. But along the way, the band had been called Hadrian (not bad), and Geddy had been in bands such as Ogilvie and Judd (ok, those ain’t so hot). Very early on, Lactic Acid’s Jeff Jones was also part of the stew.

Geddy sifts the sands and recalls a few of the covers Rush used to conjure up through the early ’70s. “We did a version of For What It’s Worth; we used to do this old Motown song called Roadrunner, but it didn’t sound anything like Roadrunner; I don’t know why we called it Roadrunner. We made it into this long extended jammy thing; Alex used to play a really long solo, but of course they were all like that. Earlier we used to play Crossroads, Suffragette City by David Bowie. I don’t know if we ever played Zeppelin in the bars. I know when we were just a high school band we used to play Livin’ Lovin’ Maid. In the early, early days, we used to play Jeff Beck’s Let Me Love You, from Truth. Also Morning Dew, some Yardbirds songs like Shapes of Things.” Larry Williams’ Bad Boy (made popular by the Beatles) got some airtime, actually right up until December ’74.