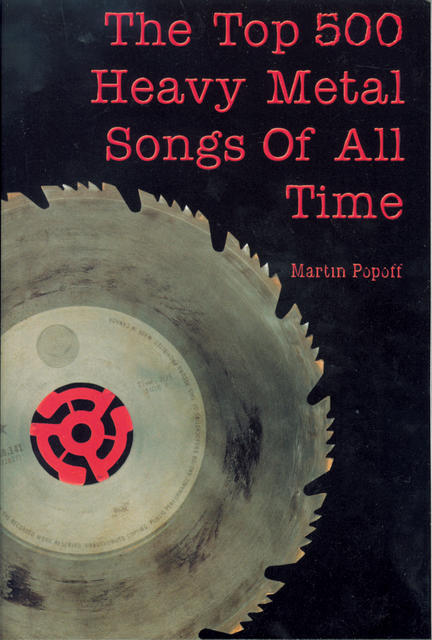 “Martin has the most thorough knowledge of heavy metal of anybody I’ve ever met.” — Dee Snider

Jimi Hendrix, Black Sabbath, Deep Purple, KISS, Mötley Crüe … “Purple Haze,” “Paranoid,” “Smoke on the Water,” “Rock and Roll All Night,” “Shout at the Devil” … Who’s number one? What’s the greatest hard rockin’ single ever? The Top 500 Heavy Metal Songs Of All Time is the end result of a massive poll asking the metal minions to list their favourite hard rock or heavy metal songs from the late ’60s through to 2001. As 18,000 individual votes were tallied and entered into a database, Martin Popoff began interviewing the bands that made the final heavy grade, gathering their recollections of creating these classic tracks.

Dozens of top rockers have been polled, and some of their lists occur throughout the book, along with shots of rare single covers (from 7-inch, 12-inch, and CD single sources) for the songs in question. Finally, a set of appendices looks at the data, revealing trends, surprises and endless grist for arguments amongst the metal masses. Containing hundreds of quotes from dozens of multi-platinum artists (from AC/DC to ZZ Top, Poison to Iron Maiden, Ozzy Osbourne to Judas Priest, Metallica to Megadeth) as well as many respected underground artists, The Top 500 Heavy Metal Songs of All Time is sure to create a firestorm of discussion throughout all facets of the media.

“Excellent! It’s one of the very few guides that gets under the skin of the music and interprets what was in the mind of its creators.” — Bruce Dickinson

Martin Popoff is the author of approximately 90 books on music, including five previous titles on Rush. He has also worked on various documentaries for Banger Films, including the award-winning Rush movie, Beyond the Lighted Stage. Popoff has published approximately 7,900 record reviews in books — more than anybody in the history of music writing. He lives in Toronto, Ontario.