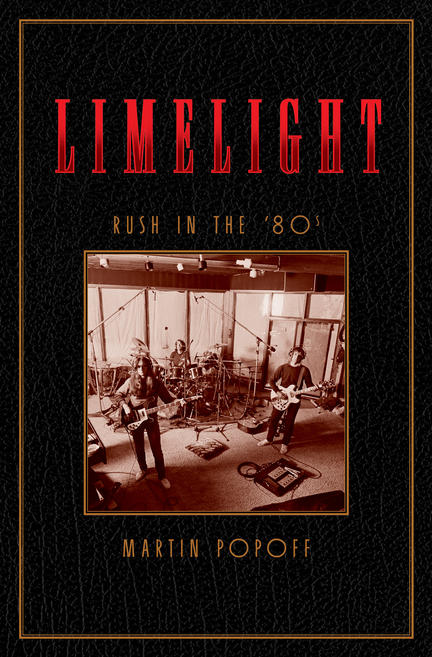 Part two of the definitive biography of the rock ’n’ roll kings of the North — covering Rush’s most iconic and popular albums, Moving Pictures and Power Windows

Includes two full-color photo inserts, with 16 pages of the band on tour and in the studio

In the follow-up to Anthem: Rush in the ’70s, Martin Popoff brings together canon analysis, cultural context, and extensive firsthand interviews to celebrate Geddy Lee, Alex Lifeson, and Neil Peart at the peak of their persuasive power. Rush was one of the most celebrated hard rock acts of the ’80s, and the second book of Popoff’s staggeringly comprehensive three-part series takes readers from Permanent Waves to Presto, while bringing new insight to Moving Pictures, their crowning glory. Limelight: Rush in the ’80s is a celebration of fame, of the pushback against that fame, of fortunes made — and spent …

In the latter half of the decade, as Rush adopts keyboard technology and gets pert and poppy, there’s an uproar amongst diehards, but the band finds a whole new crop of listeners. Limelight charts a dizzying period in the band’s career, built of explosive excitement but also exhaustion, a state that would lead, as the ’90s dawned, to the band questioning everything they previously believed, and each member eying the oncoming decade with trepidation and suspicion.

Martin Popoff is the author of 85 books on music, including four previous titles on Rush. He has also worked on various documentaries for Banger Films, including the award-winning Rush documentary Beyond the Lighted Stage. Popoff has more record reviews published in books than anybody in the history of music writing. He lives in Toronto, Ontario.

Excerpt: Limelight: Rush in the ’80s (by (author) Martin Popoff)

Pleased with the living/working arrangements for A Farewell to Kings, Rush tried it again for Hemispheres. Pleased with the living/working arrangements for Permanent Waves, Rush tried it again for Moving Pictures. Fortunately, the sequel effort this time didn’t disappoint, and the guys found themselves more Canadian than ever. Living and raising families in Canada, writing on Canadian farms, recording immersed in the Canadian forest, bridging the divide between English Canada and French Canada, winning Junos and paddling canoes . . . Rush were celebrating everything it meant to be Canadian.

“We went out to Ronnie Hawkins’s farm, out in the Stony Lake area,” begins Alex, on preparations for the record that would serve as Rush’s Machine Head and Paranoid, or Fragile and Not Fragile, as it were. “I guess it’s just north of Peterborough. He had a really nice little home up there, nice cottage with a big barn on it. We converted the barn into the studio, and set Neil’s drums up, and had areas for Geddy and myself. And it was a really nice location.

“We were there in the summer, and everybody was in good spirits. There was a good energy to the work. We started writing there and basically wrote everything in rehearsal there, and then moved into Le Studio later that fall and started recording. There was a real positive energy, not unlike what we went through with Snakes & Arrows years later. But at that time, there was just something that was very strong and positive about where we were with that record. I don’t want to say it was effortless, but the effort seemed to be very smooth. We had some guests visit, and we had a lot of fun across the whole process. It wasn’t just in the studio — it was a really nice place to be at that point in our lives.”

The guys were enthusiastic about carrying on the concept kicked off with the last album. “Yeah, it was great, really exciting,” Alex continues. “Because instead of one story you had five stories in the same time span, but you could link them with a sentiment or with an idea. A little bit less so with Permanent Waves but more so with Moving Pictures — that whole idea of a collection of short stories is what we were after and that’s what Moving Pictures is.”

Consensus is that Moving Pictures is the record where Geddy toned down his patented high shriek. “I bought it at Kresge’s,” laughs Lee on coming up with it in the first place. “I keep it downstairs in my studio for when I need it. Lifetime guarantee.

“I think I can still shriek if the music requires it,” figures Geddy. “I have no conceptual adverse feelings about it. As the music changed, it became more interesting for me to write melodies as opposed to shrieking. It was basically used for cutting through the density of the music. And sometimes we would write without any consideration for what key we were in in the early days, and I would find myself with twelve tracks recorded in a key that was real tough to sing in, so I didn’t have a choice at that point. Re-record the record in a different key or just go for it.

“Popoff’s treasure trove of enlightening and entertaining glimpses into the workings of three complex individuals combined into a cohesive unit will appeal to anyone with even a casual interest in Rush … readers will eagerly await the conclusion of this impressive endeavor.” — Library Journal

“One of the keys to success in making this book an interesting read is the interviews conducted with key personnel … As the opportunities to celebrate Rush’s catalogue are getting more and more rare, this book is a must.” — Sonic Perspectives

“Whether it’s nostalgia you’re after, or pure curiosity, Limelight: Rush in the ’80s will make for an excellent addition to your bookshelf.” — Spill Magazine

“Lucky for the reader, Popoff is a stone-cold Rush fan. This is what makes these Rush books, beyond all the many others he has authored, especially wonderful … Limelight: Rush in the ’80s is for the die-hard Rush fanatic and the casual fan alike. Not that anybody should have any doubt, but Martin Popoff delivers once again.” — VintageRock.com