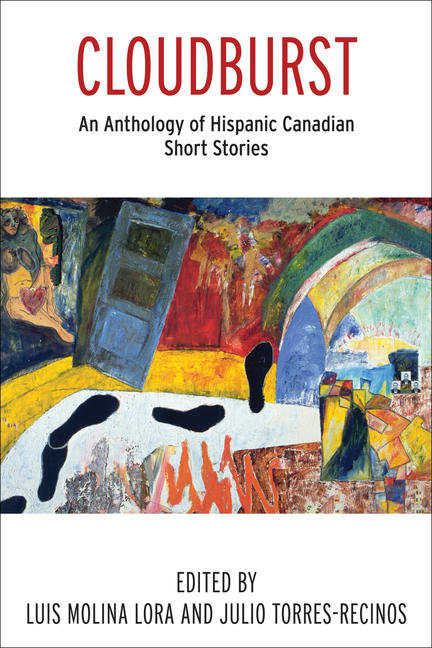 Cloudburst is a milestone in Canadian literature. For over a half-century, beginning with the Spanish Civil War and continuing through the coups d’état and military repression in South and Central America in the 1970s and 80s, Spanish-speaking writers have been arriving in Canada as exiles and immigrants and have been creating new works in their native language. Cloudburst is the first anthology of short stories by Hispanic Canadian writers from across Latin America and Spain to appear in English. Edited by Luis Molina Lora and Julio Torres-Recinos and first published in Spanish as Retrato de una nube: primera antología del cuento hispano canadiense in 2008, Cloudburst is a prodigious collective work, containing forty-two stories by twenty-two authors from nine different countries—Argentina, Bolivia, Chile, Colombia, El Salvador, Guatemala, Mexico, Peru, and Spain—and rendered into English by seven translators.
The stories in Cloudburst reflect the enormous variety of Hispanic writing in Canada today. Each of the authors’ native countries has its own artistic and literary tradition, yet all are bound together by the Spanish linguistic and cultural sphere. Moreover, the women and men in the anthology have settled in cities and towns across Canada, some of them entering into contact with the English-speaking literary world, others with the French. A number of them began writing before they left their homelands, while many of the younger contributors started their careers in Canada. Some of them prefer a traditional literary style, others a more surrealist, experimental, or colloquial approach. All of them are passionate about their writing, and all have gone through the common experience of leaving or being uprooted from the land of their birth and settling in Canada, where they face the challenges and difficulties involved in reestablishing their lives in a largely unknown environment. In Cloudburst, through the prism of translation, they share their latest fiction with English-speaking readers.
- Ce livre est publié en anglais.

Julio Torres-Recinos is an associate professor of Spanish in the Department of Languages, Literatures and Cultural Studies at the University of Saskatchewan.

Born and raised in Colombia, Luis Molina Lora obtained a Ph.D. from the University of Ottawa, and is currently a Spanish language instructor.

The Doorman of Windsor Station