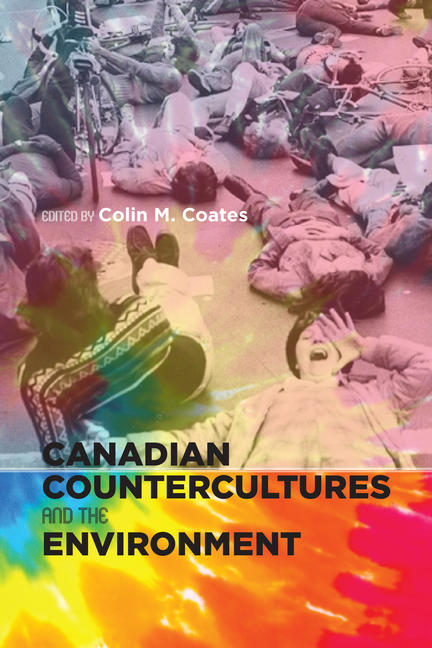 Studies of the radical environmental politics of the 1960s have tended to downplay the extent to which much of that countercultural intellectual and social ferment continued into the 1970s and 1980s. Canadian Countercultures and the Environment adds to our knowledge of this understudied period. This collection contributes a sustained analysis of the beginning of major environmental debates in this era and examines a range of issues related to broad environmental concerns, topics which emerged as key concerns in the context of Cold War military investments and experiments, the oil crisis of the 1970s, debates over gendered roles, and the increasing attention to urban pollution and pesticide use.

No other publication dealing with this period covers the wide range of environmental topics (among others, activism, midwifery, organic farming, recycling, urban cycling, and communal living) or geographic locales, from Yukon to Atlantic Canada. Together, they demonstrate how this period influenced and informed environmental action and issues in ways that have had a long-term impact on Canadian society.

COLIN M. COATES teaches environmental history and Canadian studies at York University. He is past president of the Canadian Studies Network-Réseau d’études canadiennes and was a member of the executive of NiCHE, the Network in Canadian History and Environment.

Nancy Janovicek is an associate professor of History at the University of Calgary.

Alan MacEachern grew up on Prince Edward Island and now teaches in the history department at the University of Western Ontario. He is the author of Natural Selections: National Parks in Atlantic Canada, 1935 to 1970.

David Neufeld a Parks Canada historian, has worked on Chilkoot Trail National Historic Site for over ten years. Based in Whitehorse, he does research on the Kluane National Park Reserve, the Yukon River, Dawson City and the Klondike goldfields, and the Yukon north slope.

Ryan O’Connor teaches in the Department of Canadian Studies at Trent University. He received his PhD from the University of Western Ontario and held a SSHRC postdoctoral fellowship from 2011 to 2012. His research focuses on the origins and development of the environmental movement in Canada.

Canadian Countercultures and the Environment provides an insightful and engaging overview of this understudied aspect of Canadian environmental history. [It is] a well researched survey of the broad range of approaches to environmental politics fostered by the Canadian counterculture. In focusing on the legacies of these actions, it highlights the countercultural antecedents of many contemporary environmental debates and situates taken-for-granted environmental practices within this cultural history.

This interesting and important collection of essays demonstrates that in bringing the values of consumption-oriented mainstream society into question, the youthful countercultural movement - including those who attempted to create their own utopias - made an important and lasting contribution to the environmental movement in Canada and further afield

Youth countercultures of the late twentieth century undoubtedly influenced the development of environmental thought and activism in Canada. Canadian Countercultures and the Environment offers a rich collection of essays that explore the scale and significance of that activism.

Other titles by Colin M. Coates

The Nature of Canada

Other titles by Nancy Janovicek

No Place to Go

Histories of Canadian Children and Youth

Other titles by Alan MacEachern

Other titles by David Neufeld

Heritage Route to the Klondike

Other titles by Ryan O'Connor

Pollution Probe and the Origins of Environmental Activism in Ontario

Other titles by Kathleen Rodgers

The Promise of Social Movement Societies

Other titles by Daniel Ross

The Heart of Toronto