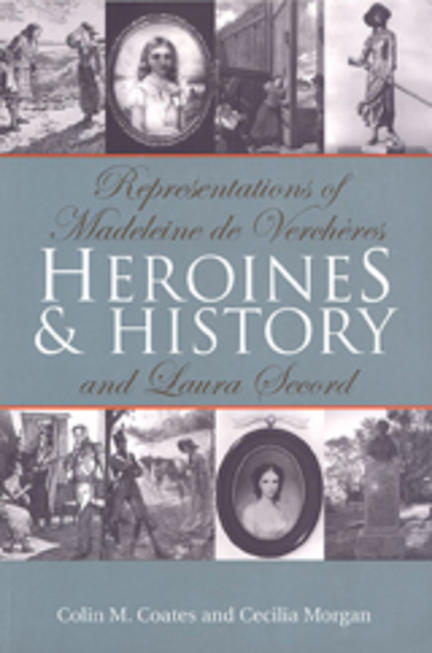 Heroines and History is a comparative study of the images of Laura Secord and Madeleine de Verchères, symbols respectively of the nationalism of English-Canadian and French-Canadian loyalism and national identity. The authors explore the relations of gender, race/ethnicity, and imperialism in defining national identity and shaping the past by looking at such things as the role of local historical societies, the formation of narratives of Loyalism and the War of 1812 in school texts, the use of historical figures in the services of twentieth-century consumer capitalism (e.g. the Secord chocolate company), and the development of tourism.

This is a fascinating comparison of the histories of Ontario and Quebec as seen through the handling of their best-known heroines. The story of Laura Secord and her cow bravely crossing the American lines to warn the British during the War of 1812 is well known in Ontario; most of us also grew up with the legend of Madeleine de Verchères defending Montreal against the Iroquois in 1692. Although both tales are dubious, the authors show how the images of these heroines were used for nationalistic purposes in both provinces, and how their images changed down through the ages.

Heroines and History is a unique work, one which makes a significant contribution to the growing body of literature on commemoration, as well as to the literatures of gender, cultural, and aboriginal studies. It is accessible both to an audience of specialist academic readers and to a wider readership of those interested in Canadian history and society.

COLIN M. COATES teaches environmental history and Canadian studies at York University. He is past president of the Canadian Studies Network-Réseau d’études canadiennes and was a member of the executive of NiCHE, the Network in Canadian History and Environment.

Cecilia Morgan is Professor at the Ontario Institute for Studies in Education, University of Toronto. She is the author of Commemorating Canada: History, Heritage, and Memory, 1850–1990s (2016), as well as Creating Colonial Pasts: History, Memory, and Commemoration in Southern Ontario, 1860–1980 (2015).

Other titles by Colin M. Coates

The Nature of Canada

Other titles by Cecilia Morgan

A Transnational History of Stage and Screen Actresses

Historical Essays in Femininity and Masculinity in Canada

The Gendered Languages of Religion and Politics in Upper Canada, 1791-1850