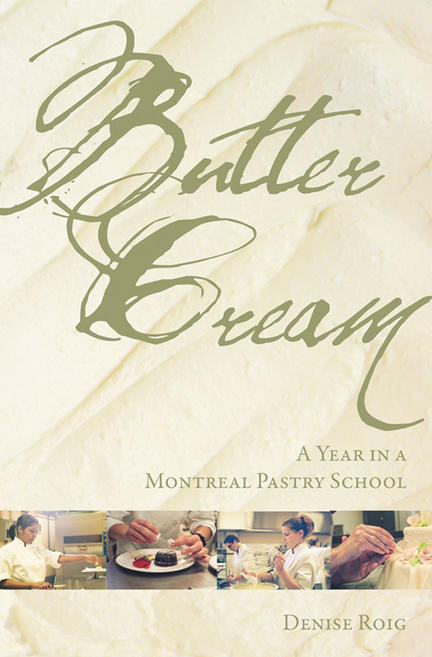 What happens when a 56-year-old fiction writer decides to ditch it all and attend professional pastry chef school for a year? In writing that brings to mind the work of journalist/chef Michael Ruhlman, Butter Cream: A Year in a Montreal Pastry School tells the story of eleven months of whipping, spreading and creaming in the pursuit of perfection. When Denise Roig set out to do this -- a lark, she thought -- she had no idea what it would cost and what it would give back.

Butter Cream is the chronicle of an intense year of learning and tasting, dramas at the stove and in the locker room. It's about fights, friendship and competition, fallen cakes and rising doughs. And sometimes, unexpectedly, it's about the sheer joy of baking. It's a memoir that also includes trips back to Roig's mother's and grandmother's kitchens and to her own complicated relationship with all things sweet.

Trina turns to look up at the clock. It's 9:04, a little more than a half-hour into the Pastry Olympics. "Whew!" she says so loudly I hear it across the room. She shakes her head.

The girls at my station are moving as if in a dream. They need a foot at their backs, a spatula at their bums. They need Claudette.

Everyone else is on pastry cream: at the stove, at the counter whisking eggs and sugar, spreading the custard in plastic trays lined with plastic wrap. Watching Trina working her pastry cream with her whisk, smoothing it with her rubber spatula onto the tray, I see again how physical this is. It's in her head, but it's also in her shoulders and legs and wrists.

Contender number four is already piping the pâte à choux for her Carolines. She's doing it steady as a machine, perfect, two-inch sticks. Meanwhile, the girls from my station are still at the stove making pastry cream. They finish at almost the same moment and there's a sudden pile-up of pots and whisks in my sink. The dreamy Pius X girl in the tight black pants goes back to her table, where she keeps looking at the recipe booklet, pausing, looking again. She excuses herself to go to the bathroom. Five minutes later she's back, eyes down. She's completely lost.

Qiang comes to relieve me at my sink, so I can now watch like a spy from the back corner of the room. Claudette told me I had to observe from here if I wasn't washing dishes. It's a different -- bad -- view. I can see only the backs of people. I watch Rena's arm expertly folding in the parts of her chocolate mousse, watch her hand dip into it with a plastic spoon, but I can't see her face to see how it tastes. I see her arm tuck the bowl into the under-the-counter fridge.

A judge comes by and motions her to take the bowl out. He takes a spatula to it, lifts a mound, lets a few blobs fall back into the bowl. His face registers nothing but study.

By 10:30 one thing is clear. There are -- despite the my-way-or-the-highway approach of some of our teachers -- different ways to slice a pâte sucrée, or anything else for that matter. Contestant number four cut her pâte sucrée into one-inch slices, then stuck all the slices back into a ball, softening the cold dough faster than is possible when it's in one chilled lump. Next, she poked two holes -- not one, as we've been taught -- in the bottom of the choux for easier filling. Brilliant.

The girl is from the ITHQ, Claudette confirms, stopping to talk for a minute. We watch the young woman. Even her hat is intimidating -- tall, beautiful, like pleated organdy, a commanding admiral's hat. Though she is still a student, she is wearing a professional chef's hat. "They have a lot more time to practise at that school," Claudette says, sounding for the first time defensive about her efforts with Trina and Rena. I tell her about the two women at my station, that I could tell they hadn't been trained by her.

"Ahh," she says and puts her arm around me.

"I can't look," she says and returns to watch from the pastry office.

How's it going? I ask Rena who's stopped for a bite from the smorgasbord of food Wendy and Nadia have brought in, a grab-as-you-can lunch for contenders and dishwashers. Rena grins, gives me the thumbs up. I'm happy to know this, though we both know it could change in a moment.

I've slipped onto a stool near Tara, but I still can't see enough. Then I spot Trina striding down the aisle, her tray of millefeuilles held high over her head. Her cheeks are pink; no, crimson.

"She's nervous," says Tara under her breath. And she tells me that after watching the judges swarm Trina's station and check things off on their clipboards with non-committal eyes, Diane -- disappointed at coming in fourth in last month's primaries -- is now glad she didn't win. "I couldn't have done this," she'd told Tara. "There's a reason for everything."

An hour later, Trina stands doubled over her work station, not even lifting her eyes to the clock. Miss ITHQ is pulling fondant -- the glue that does not necessarily hold things together -- out of its plastic container, wrestling it into a small pot. Even she can't do this easily. Trina keeps her head down. Miss ITHQ remakes a cornet, seems to be picking up speed.

At lunch a judge had remarked to Claudette, "That girl from the ITHQ is good." Ardis winces when she tells me this. "I have a feeling she's going to win," she says.

The girl in the hijab is wandering around, looking disoriented. I know that look. I wear that look probably more than I care to admit. But I also know it doesn't belong in a competition. I'm surprised. Calixa-Lavallée is supposed to have a pretty good pastry program.

Trina's still bent over her table. Rena's eyes are fixed on tiny slices of fruit. The girl across from her, one of the students from Pius X, is only now rolling out her pâte for the millefeuilles. Trina and Number Four filled and glazed theirs an hour ago. They're a thousand layers ahead of her. This is beginning to make me crazy. I feel the clock ticking in my head, in my hands. I want to shake that girl.

Trina's upright at last and rolling something between her palms, hands in the air. Marzipan for the roses on her birthday cake. Last week in a practice, she sculpted a bouquet of yellow buds, nestled half a dozen sugar violets among the blossoms, circled them all in the palest yellow shell border, and wrote Bonne Fête in a script that dipped and curved in all the right places. It was a cake so beautiful it made me want to cry. "That's why she's in the Olympics," Tamara said on the way home that night.

And that's why I'm not. Lorrie thought I should give it a shot. "Come on," she urged me a couple of months ago. "Put your name in. How can you write about something unless you're doing it yourself?" That, of course, has been my argument to my friends all year, but I don't appreciate it being thrown back at me.

"I'm too old to be considered," I said, knowing this wasn't the issue.

"Diane's almost forty and she's doing it for the experience," said Lorrie.

"Just being in this course is enough challenge for me," I finally said. "I really don't need the extra stress, Lorrie."

"It would be good for you," she said.

"You're not entering," I said.

Still, it's impossible to watch today's competition and not wonder, Could I do that? I see the questions on the faces of my fellow dishwashers. Could I produce steadily hour after hour? Could my body, my ego, my patience hold up? Because this is what comes clear by noon: the Pastry Olympics is about not choking, especially not choking when you feel most like choking. As in pastry as in life.

Denise Roig's Butter Cream proved to be a very pleasant (dare I say 'tasty') surprise. When it first rose out of the package, I had my doubts, saying to myself, "I hate butter and I'm not all that crazy about cream, so this book starts off with two strikes against it." But this is a case of literally not judging a book by its cover. Or perhaps a case of making sure to read the fine print in the subtitle: "A Year in a Montreal Pastry School." In fact, by the time I got to fin 250 pages later, I realized I had undergone a thoroughly enjoyable (and educational) experience, not to mention a much greater appreciation of all those pastry-chefs-in-waiting who aspire to creating the crème caramel sans parallèle. Roig manages to combine the light and light-hearted in the world of intense pastry-schooling (and the fine art of baking) with a real grasp of the various human interactions involved in such an endeavour. These interactions reflect both those between teachers and students and among the students themselves. Roig's strengths lie in her ability to reveal human interaction in circumstances both rewarding and nerve-wracking. Not that this should come as a surprise: Roig is an established, veteran writer of both non-fiction and fiction, with several collections of short stories (A Quiet Night and a Perfect End and Any Day Now), and an experienced freelancer with more than 30 years in the field. Through the teacher-student connection, we witness the intensity of the actual learning program: how one goes about creating the various basic ingredients that go into the classic pastries and desserts. Through the connection we also get the intensity of the interpersonal clashes and bonds that the students have to sort out for themselves... A sense of fragility and the overcoming of deficits, both personal and social, threads its way through the book. So does the idea of growing, of fulfilling certain dreams, of being able to look in the mirror while congratulating oneself. Roig has the ability to pass these feelings on to the reader and to make all of us appreciate what goes into achievement, what it means to accomplish something, and the sacrifices that need to be made in order to do so.

A Quiet Night and a Perfect End