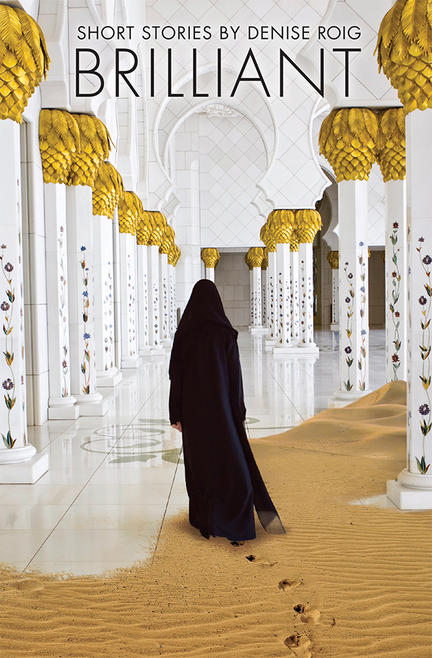 Brilliant is a collection of short stories set in Abu Dhabi, capital of the United Arab Emirates, a polyglot city where cultures collide and converge, where money -- and sometimes justice -- is no object, where in less than two generations towers have replaced tents. In these stories, a cast of characters -- an Egyptian pastry chef, a Filipina nanny, a Canadian nurse, a lusty French urban planner, a newly destitute British couple, and a cross-dressing Emirati -- navigate this land of sudden plenty, discovering the limits of freedom, money, tolerance and their own good sense.

from "Fridays by the Pool in Khalidiyah"

Once, in the first year after she and Firaj moved to Abu Dhabi, to a compound in Al Mushrif, she'd heard screams coming from the villa next door, then an hour later an ambulance pulling into the shared drive. They had only a passing acquaintance with the neighbours, a couple from Belgium (a bit stuffy, but pleasant enough) and the two Filipinas who worked for them.

"I don't understand," she'd told Firaj. "What could they possibly need two maids for? They don't even have kids." And Firaj had explained that most likely one did the shopping and cooking, the other took care of the house. "Polishing the silver, who knows?" he'd said. "You'll never get this, will you? When money is no object, people don't have to do anything they don't feel inclined to do." His own mother in a suburb of Amman still employed a live-in maid, though she was a widow with no grandchildren.

Angie didn't know the maids' names, just raised her hand in greeting when she saw them. One had a sweet smile; the other only bobbed her head. The smiley maid seemed to be gone, Angie noticed about a week after the ambulance. She'd been the one who usually went out with the Belgian woman to help with the shopping. Now it was the other one who unloaded the plastic bags from the back of the SUV.

One afternoon when Angie was leaving to pick up their mail at the post office, she found the maid standing next to her car. "Please," she said, looking around. "Please." The woman looked so desperate, Angie coaxed her into the car.

"I need phone," said the woman. She wasn't especially young, Angie saw now. "I am Inez." The other maid was in the hospital, she said. The man had thrown her against a wall, then knocked her to the kitchen floor when she'd refused to give him a massage. There was blood. The man had finally called an ambulance. But now there were other problems, said Inez. The couple had taken away her mobile phone, afraid she might tell someone what had happened. Madame was yelling all the time and the man was now looking at her. "You know?" She kept turning around to look down the street as she spoke. Madame was due home any minute from a luncheon, she told Angie. "Today I wait for you. You always wave."

If the phone got traced back to Angie, she'd have to deal with the couple. There could be legalities, complications. She might get Firaj into trouble. Then she noticed Inez's hands, chapped, scabbed, scarlet. It hurt to look at them. She opened her purse, rummaged for her phone, handed it over. But the charger. She'd have to run inside for the charger. A bronze Land Rover appeared in the rearview mirror.

When the Belgian woman climbed down from her SUV a minute later, head bent into her mobile, she waved to Angie, who watched as Inez, standing on the curb as if she'd been waiting all this time for Madame to return, took the Paris Gallery bag she was handed. Inez did not look back, but Angie had seen her slip the phone into her uniform pocket as she sprang from the car.

For the next few days, Angie called her mobile. No one answered, no one returned the calls. She told Firaj, in minimal detail, what had happened. He wasn't impressed. "You've got to be more discreet. Who knows who these people are connected to? Remember that we are guests in this country. And even though we are the majority and Emiratis amount to...what? barely 15 percent of the population...it's their party."

Denise Roig's extraordinary and subtly linked sweep of stories is riveting. She creates a Middle East -- full of heat, traffic, laughter, absurdity, tragedy, poignancy and food --with insight into human nature and a deft touch with characters. It's a thoroughly nourishing read.

A Quiet Night and a Perfect End

A Year in a Montreal Pastry School