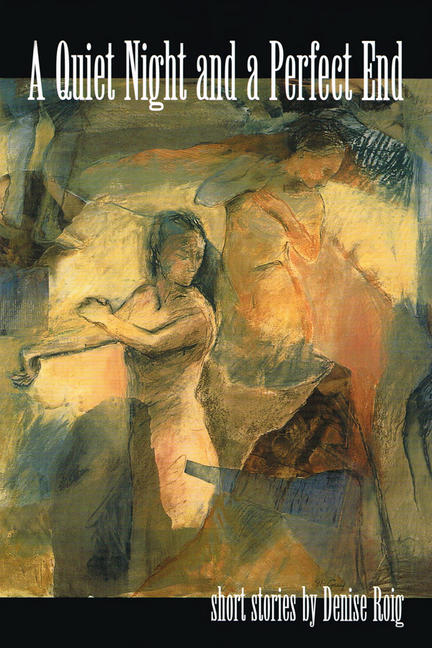 The days of which Denise Roig writes in A Quiet Night and a Perfect End are filled with Chinese-cooking lessons, wedding preparations, and day trips to the Laurentian mountains. They're peopled by fundamentalist fishermen, mothers, daughters, fathers and sons, the kind of people who seek quiet nights and perfect ends to the turmoil of their long days and shaky beginnings. In short, these are stories about ordinary people's extraordinary ability to cope with the unexpected tragedies, large and small, that befall everyone.

Roig takes her characters, and her readers, on Munro-like passages through miscarriages, infidelities, and disappointments -- through the motions of everyday life. It may be coping with the feeling of academic failure or coming to terms with the loss of a child who has died too young, an unexpected pregnancy or the intrusion of house guests who are no longer friends. What is uplifting, finally, is the achievement of forgiveness, the small, daily victories over despair. These are stories that remind us why our days and nights are so worth living.

Excerpt: A Quiet Night and a Perfect End (by (author) Denise Roig)

My father liked three things in life: Louis Armstrong, watering the lawn and burning trash. The rest, he said, was stupid. Stupid was one of his favorite words.

We grew up, my two brothers and I, in a motel on a lake. It was a plain kind of building, white wood with green trim like a thousand other motels you pass on the highway in northern Idaho. But the lake was pretty. Big, too, shaped almost like a heart. You couldn't tell the shape from standing on the edge. You had to see it on a map.

My father did the books. My mother did the rooms. I did the linens because I was the oldest and the only girl. I washed and folded the sheets every Saturday and Sunday afternoon. I learned about life from those sheets, about places other than the lake and about people other than my family. Sometimes I found lipstick stains or blood. Once I even found two snails tied up in the corner of a queen-size flat.

The motel was called "Sleepy Hollow" and it was. It was both really. Except for seven or eight weeks every summer when our circular driveway was filled with station wagons and men calling to each other over the roofs of their cars -- "Hey, Hal! Number two's vacant. Remember number two? Ha, ha!" Big guys with white legs and bermudas that hung low under bellies that said, "I'm a man. Watch it." Until you looked at their red, plain faces, their sunburned ears, their puffy hands. Then they were just boys come to the lake for a good time.

They came without wives and kids. "For a good fff-fish," they'd tell my father, and then laugh, and elbow him, turning pink with their naughty boyness. "This is the place," my father always said. "You want a good fff-fish, this is it."

They usually arrived late in the afternoon as my mother stood sweating in the kitchen, waiting for the cake to come out of the oven. We ate a cake a night in those years. My brothers could down five, six pieces at once, a dozen if there'd been enough. My mother, who was 5'10" and still had the two-dimensional figure of the Sears Catalog model she'd been in her life before us, would duck and look out the window when she heard tires on the gravel. "It's them," she'd say, and go back to watching the cake -- Cherry Angel Food or Double Dutch Chocolate, always some mix -- through the square porthole of the oven. It was a small kitchen built for a smaller woman. She was always ducking. My father would be out in front watering the lawn when the station wagons pulled up. He watered slowly, without rush, using his fingers to splay out the water for the pansies that rimmed our yard. He'd be there -- in khaki pants and golf cap -- barefoot, deep in the lawn. Sometimes the cars bumped each other, the men blasting their horns, bouncing against each other's fenders. "Bernie! Fuck off! Hey, guy!"

And my father would keep watering for a few more minutes, surveying them from the slight incline of the lawn. Then he'd raise his arm, the hose in his hand releasing an arc of water into the grass. It was the farthest he'd go to greet people. The men -- one or two that were the ringleaders, usually the largest and loudest -- would come up the lawn and shake his free hand.

"Hi, there. I'm Jack. This here's Larry. That's Gil in the Winnebago."

"Right," my father said to the mass of manhood collected on his lawn.

"Right," said my father. And then they'd follow him through the door marked "Office," the service porch where my father kept all the keys.

He hated them. He called them the brainless ones, the zits of the world and worse. I heard him call one a cocksucker once when he thought we kids were watching TV in the other room. I was coming into the kitchen to get a last piece of cake and I heard the word. Cocksucker. It held its own in the kitchen, like someone taking up space, like a person leaning against the kitchen sink. "Sam," my mother warned. "Jeanette," my father warned back. They could use each other's names as weapons.

"Sis knows what I mean anyway, don't you, Sis?" and my father stuck out his foot and put it on mine, a gesture meant to be affectionate. "She doesn't suffer fools any more than I do, do you, Sis?" And I shrugged, took the cake and left. I couldn't bear at 15 to openly agree with anything either of them said.

"What's to hate?" my mother sometimes asked over dinner when my father was ripping into the lame brains, the armpits, the assholes. "It's not hate," he'd say. "It's more like," he paused, steak in his mouth. "More like repulsion."

"It's rude," my mother insisted. "We need them. We need their business. Try and be nice."

"Nice, nice, nice," my father said. "Nice is stupid." And he went outside and watered the lawn even though he'd already done it earlier that evening. And then later, much later, when we'd all gone to our own rooms, we might hear "What a Wonderful World," Satchmo himself taking up residence in the den.

It wasn't really a den, my mother just called it that. It was more like a screened-in porch where my father kept the hi-fi and a pile of old records. There was just one chair in there, a La-Z-Boy in crushed brown velour. My father would lie way back in that chair, waving one hand back and forth like he was conducting. The other hand held a glass. Most of the time I couldn't actually see the glass, but I knew it would be full. Something pale yellow. He didn't sing along with old Louis. He didn't even close his eyes. He just waved his free hand. "What a wonderful world."

A Quiet Night and a Perfect End is anything but predictable. In story after story, Roig avoids easy drama and through apparently simple narratives, reaches deep into the human psyche, probing with refreshing delicacy the fragile balance of the human condition. She has also avoided the bete noire of first books by keeping coming-of-age angst to a minimum. Instead, most of these stories focus on distinctly adult dilemmas: the constancy of matrimonial love, the subtle power plays between partners, the unbearable pain of losing a child, physically or metaphorically, and the complex joy of intimacy. At this stage of life, there are few quiet nights and no prospect of a perfect end, but somehow, in Roig's version of things, that doesn't seem so bad. In fact, it makes a precious kind of sense.

A Year in a Montreal Pastry School