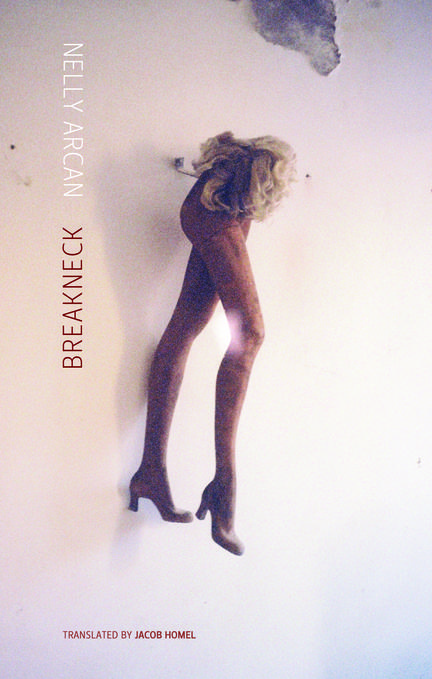 Rose Dubois and Julie O’Brien find themselves on the roof of a Montreal apartment building on a scorching summer’s day, and from that moment on their fates are intertwined. Worldwide climate change and dramatic shifts in weather patterns foreshadow their predestined suffering.

As is soon revealed, the two women share a submissive love for the same man, Charles. Their mutual desire creates an arms race of artificial beauty and debasement; they have a common obsession for plastic surgery and strive to be avatars of the perfect female.

As they compete for the love and attention of Charles, both women come to realize that to accept being nothing more than an object, to kneel and grovel before your persecutor, you ultimately become his executioner. In the end, Charles’ own obsessions and desires—which he loathes—are ultimately his undoing and downfall.

"... With the publication of Breakneck this month (A Ciel ouvert, 2007), the small Canadian publisher Anvil Press concludes its project of publishing all of Arcan's novels in translation. ...Fantastically intelligent, always trying to second-guess how a woman should be, Arcan finds death the only answer to her predicament. In style and emotion—and honesty—her work is a much closer cousin to Edouard Leve's Suicide than to the archness of Belle de Jour or Catherine Millet. The best way to absorb Arcan's work is to read it in chronological order, and then to lament that the titles of her work—Whore, Hysteric, Breakneck, Exit—so succinctly and poignantly summarize the short life and hard-won philosophy of this exceptional writer." (The Times Literary Supplement)

"Breakneck is above all else an anxious novel, swimming in an excess of intoxicants and physical extremes, bouncing back and forth between personal improvement and destruction. It is 'troubling and filled with pleasure'—a phrase one of the women uses to describe her developing romance with Charles. Arcan’s frenetic, even disturbing prose— here in translation by Jacob Homel—mimics the book’s title, strong-arming its reader into an intense philosophical examination of vanity and excess. What risks coming across as a shallow narrative benefits from the incredibly thoughtful introspection that has come to define Arcan’s unique world. The late Quebec writer readily understood the all-consuming depths of what we often wrongly deem as superficial." (Quill & Quire)

"Breakneck, Nelly Arcan’s newly translated third novel (originally published in 2007 in French as À ciel ouvert), secures the late author’s singular place in Canadian letters as a writer who punctures the platitudes of sex. Composed in Arcan’s trademark fiery style, Breakneck sets up a struggle between Rose and Julie, two successful, artistic women who want the same man. Breakneck is an unflinching, often outlandish look at female extremity in the matters of the heart, exposing how female rivals often share the same flaws. This is sisterhood, in Arcan’s formation, 'at the bottom of the barrel.'" (The National Post)

One of 49th Shelf's Most Anticipated Fiction Titles, 2015