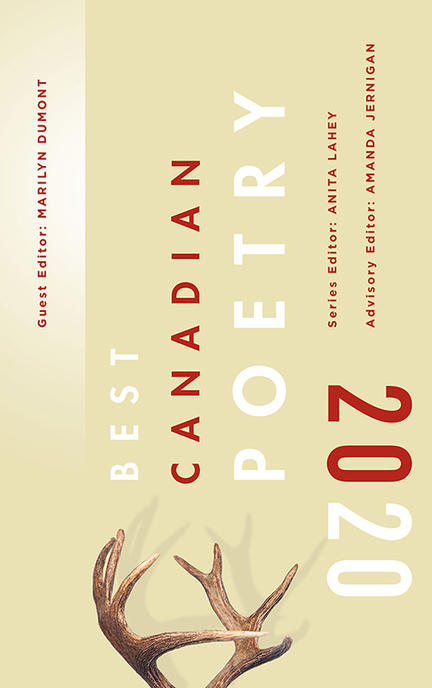 "A best poem fulfills the promise set out in its first syllable, word, syntax, line break, and soundscape to its reader/listener."

“What is a best poem?” asks Best Canadian Poetry 2020 guest editor Marilyn Dumont, the critically acclaimed and award-winning author of four poetry collections. “A best poem fulfills the promise set out in its first syllable, word, syntax, line break, and soundscape to its reader/listener. The work required to complete a poem takes risk, skill, and practice, and the poems selected for this anthology all exhibit such attributes.” In precise language that exposes the attitudes inherent in English, innovative forms that illuminate their content, and mastery of music akin to a composer’s score, the fifty poems collected here fulfill their promises and, in doing so, demonstrate the country’s rich diversity and talent for invention—and the promises it might fulfill as well.

“A radical and wholly revelatory re-imagining of the country’s poetry canon ... The anthology compiled by Dumont is undeniably political and deeply philosophical, but never at the expense of prosody ... Best Canadian Poetry 2020 is an outstanding record of diverse voices and lived experiences reflected in Canadian poetry, and it is one that I will undoubtedly return to in the years to come.”—Prairie Fire

“[These] books are must-haves for libraries, schools, and intellectually well-intentioned bedside nightstands across the country.”—Quill & Quire

An Anthology of Myth Poetry