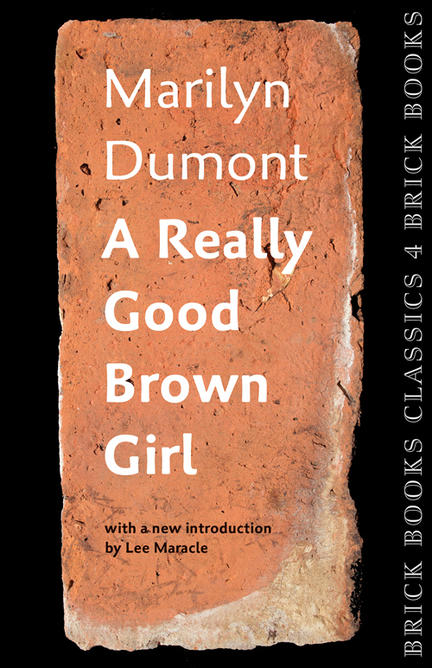 On the occasion of the press's 40th anniversary, Brick Books is proud to present the fourth of six new editions of classic books from our back catalogue. This edition of A Really Good Brown Girl features a new Introduction by Lee Maracle, a new Afterword by the author and a new cover and design by the renowned typographer Robert Bringhurst.

First published in 1996, A Really Good Brown Girl is a fierce, honest and courageous account of what it takes to grow into one's self and one's Métis heritage in the face of myriad institutional and cultural obstacles. It is an indispensable contribution to Canadian literature.

I am looking at a school picture, grade five, I am smiling easily — I look poised, settled, like I belong. I won an award that year for most improved student. I learned to follow really well. — from "Memoirs of a Really Good Brown Girl"

"No other book so exonerates us, elevates us and at the same time indicts Canada in language so eloquent it almost hurts to hear it." — Lee Maracle, from the Introduction

A Really Good Brown Girl is a collection of forty-nine poems arranged in four sections: Squaw Poems, What More Than Dance, White Noise and Made of Water. Each reflects various emotional, personal and social issues Aboriginal peoples have experienced. Although the poetry addresses serious themes, Dumont challenges the reader with wit and humour.

Marilyn Dumont, a descendant of Gabriel Dumont, is a writer from northeastern Alberta. She is an Aboriginal educator. Her poems are anthologized in The Road Home, Writing the Circle, The Colour of Resistance, Locating Identity and Looking At The Words of Our People.

My Conversations With Canadians

The Classics from Brick Books

A totally scientific list of the funniest poets in all of Canada.

The Heaviness of Things That Float is, at its heart, a novel about decolonization and the moral obligation of non-Indigenous people to take part in this …