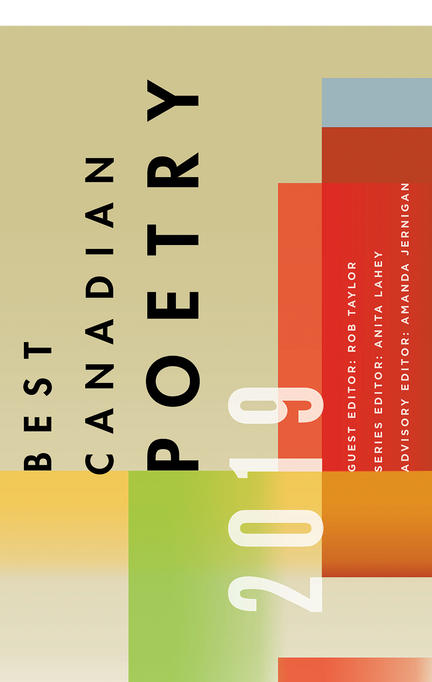 Guest editor Rob Taylor, author of the widely acclaimed collection The News, brings a passionate ear for rhythm, an eye for narrative compression, an appetite for vital subject matter, and an affinity for warmth and wit to his selections for Best Canadian Poetry 2019. The fifty ruggedly independent poems gathered here tackle themes of emergence, defiance, ferocious anger, gratitude, and survival. They are alive with acoustic energy, precise in their language, and moving in their use of the personal to explore fraught political realities. They emit a cloud of invisible energy, a charge.

Rob Taylor was born and raised in Port Moody, BC, and lives in Vancouver with his wife and son. He is the author of two books of poetry: The News (Gaspereau Press, 2016) and The Other Side of Ourselves (Cormorant Books, 2011). In 2017, The News was shortlisted for the Dorothy Livesay Poetry Prize, and in 2010 the manuscript for The Other Side of Ourselves won the Alfred G. Bailey Prize. He was the poetry editor at PRISM international in 2014–15. Rob has run a blog devoted to Canadian poetry, Roll of Nickels, since 2006. In 2015 he received the City of Vancouver’s Mayor’s Arts Award for the Literary Arts as an emerging artist. He teaches Creative Writing at the University of the Fraser Valley.

"[These] books are must-haves for libraries, schools, and intellectually well-intentioned bedside nightstands across the country."—Quill & Quire

“The Best Canadian Poetry series offers an annual sampling of voices and experiences—a little slice of Canadiana that may be appreciated beyond borders as well.”—Examiner.com

“Canada’s most eloquent, profound, humorous and meditative writers, ranging from the seasoned and well known to the new and upcoming.”—Broken Pencil

Other titles by Rob Taylor

What the Poets Are Doing

The Other Side of Ourselves

Out to Dry in Cape Breton

An Anthology of Myth Poetry