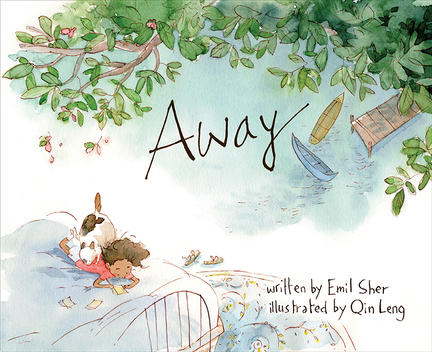 Love shines through in the sticky notes shared between a mother and daughter in this picture book about making time for family in the midst of our busy lives.

Between work and school, homework and housework, a mother and daughter don’t always get to spend as much time together as they’d like. Add to that a little girl’s fears about leaving home for the first time, and the need to stay close through handwritten notes becomes even more important. As the camp departure date gets closer, Mom does her best to soothe her daughter’s nerves. A visit from her grandmother helps to calm her fears and convince her that she’ll have a good time, even away from her mother and beloved cat. Camp ends up being a wonderful adventure – but nothing is sweeter than a back-at-home reunion.

Qin Leng’s watercolor illustrations are the perfect complement to Emil Sher’s simple text. This nuanced story about a parent and child’s unconventional way of connecting is full of humor and affection. Young readers will enjoy spotting Lester the cat as he paws his way into the story.

CCSS.ELA-LITERACY.RL.K.3
With prompting and support, identify characters, settings, and major events in a story.

With an entertainingly offbeat storytelling format and fantastic artwork full of eye-catching details … this endearing picture book with an empowering message of bravery will surely resonate with little ones nervous about their own burgeoning independence.

Leng's breathy illustrations exude the easy energy of the characters while bringing their deceptively simple notes to full emotional life … Untrammeled and honest.

With intricate images to pore over, this enchanting and original title is ideal for one-on-one sharing and the perfect antidote for children dreading their first overnight trip. Superb.