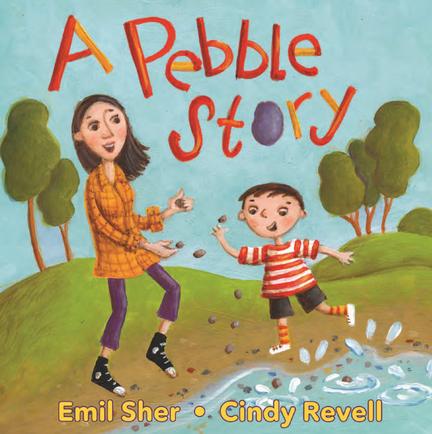 A child’s imagination can find something magical in just about anything—even an ordinary pebble. In this colorful board book, a little boy uses red and black pebbles to make a face. But when it comes to the teeth, wouldn’t green ones be perfect? With bucket in hand, he and his mom set out to find those just right pebbles.

He finds pebbles on the road, in the river, and even in his dreams, but there are no green pebbles anywhere. The solution is easy—all it takes is some green paint, and before you know it, his pebble face is sporting a big green pebble smile.

Perfect for very young children, this whimsical book shows how imagination and creativity can make anything possible. Sparse yet lyrical text describes the idyllic time the little boy spends with his mother, while the charming illustrations reflect the simple pleasures of a day in the country.

Cindy Revell planned on becoming an artist ever since her first taste of wax crayons during her childhood in Carrot River, a small town in Saskatchewan. After some very uncreative forays into the working world Cindy realized that she needed to get back to art and went to college receiving her diploma in Environmental Graphic Design. Cindy worked as a designer and illustrator eventually going on to become an award winning freelance illustrator.

Her illustrations have been used on billboards, wine bottles, books, magazines, calendars, furniture, packaging and numerous children's books all over North America. She was nominated in 2001 for a Governor General's award for children's book illustration (Mallory and the Power Boy). Some of her clients are: Adobe, L.A. Times, Washington Post, Harvard Business Review, Better Homes and Gardens, Cornell University, Penguin Putnam, Annick Press, Orca Book Publishers and Scholastic.

As well as being an illustrator, she is an accomplished oil painter. Several years of regular oil painting classes, numerous international and provincial workshops and traveling to view and learn from the old masters as well as her design and illustration training have helped her develop as a traditional realist.

Cindy is represented by Deborah Wolfe Ltd. See her work at http://www.cindyrevell.com.

“Light fun that just might lead to some arts and crafts ideas.”

“A positive purchase for a home or day-care setting, for a read-aloud with an adult or for a child to read and enjoy on his or her own.”

“The illustrations depict lots of love between mother and son and add a bit of fun.”

“Cheerful illustrations in oil bring the story to life, complementing and supplementing the very simple text.”

“Perfect book for holding the attention of very young listeners with its colorful illustrations and melodic verbage.”

Other titles by Cindy Revell

What Happens When a Loved One Dies?

Our First Talk About Death

Where Do Babies Come From?

Our First Talk About Birth

What Makes Us Unique?

Our First Talk About Diversity

Why Do Families Change? Read-Along

Our First Talk About Separation and Divorce

Why Do Families Change?

Our First Talk About Separation and Divorce

What Makes Us Unique? Read-Along

Our First Talk About Diversity

A Sack Full of Feathers Read-Along