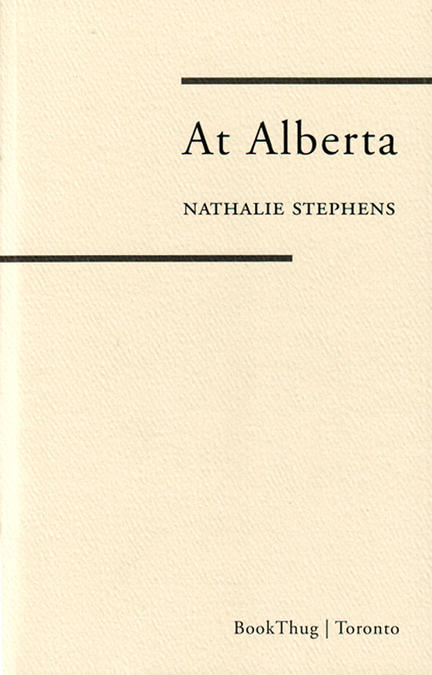 The talks collected in AT ALBERTA have as their ironic coincidence: place. Spatially concurrent, they were all delivered in Edmonton. They deliberately thwart the systematic treatment of genre, translation, desire, and territorialisation through reiterated displacement, subterfuge and irritation. Distrustful of genre delineation, Stephens pursues her work away from the usual generic safeguards, preferring instead the unexpected that arises from the arguably disreputable and misunderstood place where various lines cross. AT ALBERTA persues a new critical position in her delineation. Stephens is the author of a dozen books, including THE SORROW AND THE FAST OF IT, JE NATHANAEL, TOUCH TO AFFLICTION, and PAPER CITY.

Nathalie Stephens (Nathanael) writes l'entre-genre in English and French. She is the author of a dozen books including ABSENCE WHERE AS (CLAUDE CAHUN AND THE UNOPENED BOOK) (Nighboat Books, 2009), At Alberta (BookThug, 2008), THE SORROW AND THE FAST OF IT (Nightboat Books, 2007), Touch to Affliction (Coach House, 2006), Paper City (Coach House, 2003), Je Nathanael (l'Hexagone, 2003) and L'Injure (l'Hexagone, 2004), a finalist for the 2005 Prix Alain-Grandbois and Prix Trillium. JE NATHANAEL exists in English self-translation (BookThug, 2006). Other work exists in Basque and Slovene with book-length translations in Bulgarian (Paradox Publishing, 2007). In addition to translating herself, Stephens has translated works by Catherine Mavrikakis, Gail Scott, Bhanu Kapil, and Sina Queyras.

Other titles by Nathalie Stephens

The River of Dead Trees

translated by Nathalie Stephens
by (author) Andree A. Michaud

A Cannibal and Melancholy Mourning