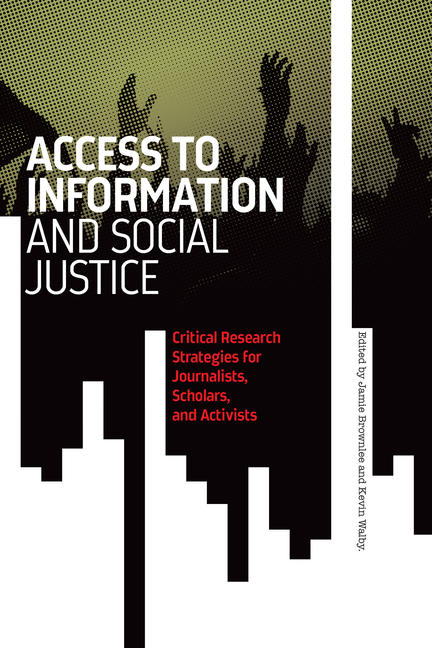 Access to Information and Social Justice combines the political and the practical aspects of Access to Information (ATI) research into a single volume in order to reinvigorate critical social science, investigative journalism, and social activism in Canada. Not only does it expose some of the most important political stories and issues uncovered by ATI researchers in recent years, it also facilitates future investigations by demonstrating, in concrete ways, how any citizen can effectively use ATI requests in their work and in their capacity as socially engaged citizens.

Edited by Jamie Brownlee and Kevin Walby, contributors to this book include award-winning journalists and prominent academics, as well as activists working on the frontlines of social and environmental justice in Canada.

Jamie Brownlee is the author of Academia, Inc.: How Corporatization is Transforming Canadian Universities (2015, Fernwood) and Ruling Canada: Corporate Cohesion and Democracy (2005, Fernwood). He holds a PhD in Sociology and Political Economy from Carleton University. Using information collected through Access to Information requests, his doctoral research examined the influence of corporate power in the sphere of higher education.

Kevin Walby is Assistant Professor of Criminal Justice at the University of Winnipeg. He is the author of Touching Encounters: Sex, Work, and Male-for-Male Internet Escorting (2012, University of Chicago Press), the co-author of Municipal Corporate Security in International Context (2015, Routledge), and the co-editor of Brokering Access: Power, Politics, and Freedom of Information Process in Canada (2012, UBC Press) and Policing Cities: Urban Securitization and Regulation (2013, Routledge). He is also the Prisoners' Struggles editor for the Journal of Prisoners on Prisons.

Kevin Walby is Associate Professor of Criminal Justice at the University of Winnipeg. He has authored or co-authored articles in British Journal of Criminology, Qualitative Inquiry, Qualitative Research, Punishment & Society, Antipode, Policing and Society, Urban Studies, Surveillance and Society, Media, Culture, and Society, Sociology, Current Sociology, International Sociology, Social Movement Studies, and more. He is author of Touching Encounters: Sex, Work, and Male-for-Male Internet Escorting (2012, University of Chicago Press). He is co-editor of Brokering Access: Power, Politics, and Freedom of Information Process in Canada with M. Larsen (2012, UBC Press). He is co-author with R. Lippert of Municipal Corporate Security in International Context (2015, Routledge). He has co-edited with R. Lippert Policing Cities: Urban Securitization and Regulation in the 21st Century (2013, Routledge) and Corporate Security in the 21st Century: Theory and Practice in International Perspective (2014, Palgrave). He is co-editor of Access to Information and Social Justice with J. Brownlee (2015, ARP Books) and The Handbook of Prison Tourism with J. Wilson, S. Hodgkinson, and J. Piche (2017, Palgrave). He is co-editor of Corporatizing Canada: Making Business Out of Public Service with Jamie Brownlee and Chris Hurl (2018, Between the Lines Press). He is co-editor of the Journal of Prisoners on Prisons.

It's time to expand public awareness about how the right to know is being deliberately undermined, often with smug condescension, in ways that centralize power through the control of information. It's time for a thoughtful national debate on the legislative mechanisms designed to empower us all to seek answers. That's why this book matters.--Robert Cribb, Toronto Star

Other titles by Jamie Brownlee

How Corporatization Is Transforming Canadian Universities

Other titles by Kevin Walby

Changing of the Guards

A Criminology of Policing and Security Frontiers

Moving Beyond Insecurity and Exclusion

Journal of Prisoners on Prisons, V28 #1

Journal of Prisoners on Prisons, V27 #2

Journal of Prisoners on Prisons, V27 #1

Journal of Prisoners on Prisons, V25 # 1