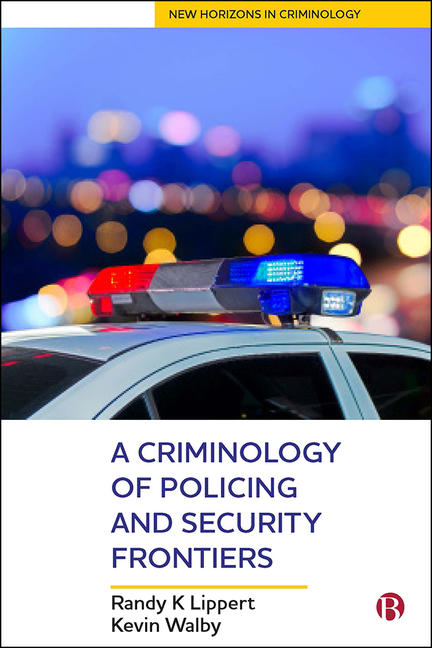 Policing and security provision are subjects central to criminology. Yet there are newer and neglected forms that are currently unscrutinised. By examining the work of community safety officers, ambassador patrols, conservation officers, and private police foundations, who operate on and are animated by a frontier, this book reveals why criminological inquiry must reach beyond traditional conceptual and methodological boundaries in the 21st century. Including novel case studies, this multi-disciplinary and international book assembles a rich collection of policing and security frontiers both geographical (e.g. the margins of cities) and conceptual (dispersion and credentialism) not seen or acknowledged previously.

Randy K. Lippert is Professor of Criminology at University of Windsor, Canada, specializing in policing, security, and governance. Previous publications include “Condo Conquest” (2019) and “Policing Cities” (2013) (with K. Walby). Kevin Walby is Chancellor's Research Chair and Associate Professor of Criminal Justice at the University of Winnipeg, Canada. Previous publications include “National Security, Surveillance, and Terror” (2017) (with R. Lippert) and “Corporate Security in the 21st Century” (2014) (with R. Lippert).

Kevin Walby is Associate Professor of Criminal Justice at the University of Winnipeg. He has authored or co-authored articles in British Journal of Criminology, Qualitative Inquiry, Qualitative Research, Punishment & Society, Antipode, Policing and Society, Urban Studies, Surveillance and Society, Media, Culture, and Society, Sociology, Current Sociology, International Sociology, Social Movement Studies, and more. He is author of Touching Encounters: Sex, Work, and Male-for-Male Internet Escorting (2012, University of Chicago Press). He is co-editor of Brokering Access: Power, Politics, and Freedom of Information Process in Canada with M. Larsen (2012, UBC Press). He is co-author with R. Lippert of Municipal Corporate Security in International Context (2015, Routledge). He has co-edited with R. Lippert Policing Cities: Urban Securitization and Regulation in the 21st Century (2013, Routledge) and Corporate Security in the 21st Century: Theory and Practice in International Perspective (2014, Palgrave). He is co-editor of Access to Information and Social Justice with J. Brownlee (2015, ARP Books) and The Handbook of Prison Tourism with J. Wilson, S. Hodgkinson, and J. Piche (2017, Palgrave). He is co-editor of Corporatizing Canada: Making Business Out of Public Service with Jamie Brownlee and Chris Hurl (2018, Between the Lines Press). He is co-editor of the Journal of Prisoners on Prisons.

''By bringing the frontier into the foreground, Lippert and Walby challenge us to question established theories and empirical research into both the historical and contemporary roles and objectives of modern policing.'' Ian Warren, Deakin University

''Lippert and Walby have been instrumental in pushing forward the study of plural policing into new and uncharted territory. This thought-provoking and imaginative book continues the journey.'' Adam White, University of Sheffield

''This fascinating book breaks down both national and academic borders in order to present a much richer understanding of the increasing coalescence of policing and security provision at the vital but under-researched frontiers of service delivery.'' Sarah Charman, University of Portsmouth

Other titles by Randy Lippert

Other titles by Kevin Walby

Changing of the Guards

Moving Beyond Insecurity and Exclusion

Journal of Prisoners on Prisons, V28 #1

Journal of Prisoners on Prisons, V27 #2

Journal of Prisoners on Prisons, V27 #1

Journal of Prisoners on Prisons, V25 # 1