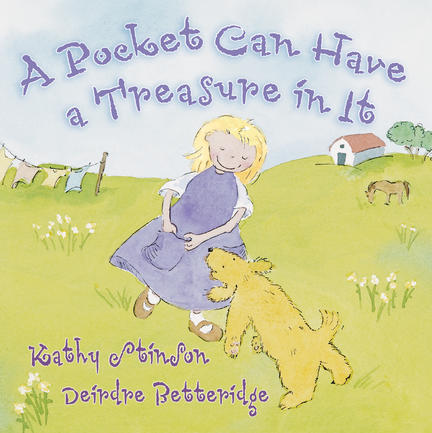 With a chorus of questions that encourage interaction, children will delight in playing with the language of spatial relationships, from a pocket holding treasure to a spoon with a face reflected in it.

For one little girl, a day on the farm is full of familiar sights that lead to the unexpected. The barn has a horse in it … just like a house can have a “me” in it. A sock can’t have a head it in, but it can have a toe in it. A pond can even have a splash in it. Best of all, when Mommy comes home, she has a blanket that has a wiggle in it–a brand new baby.

Joining charming pictures and a satisfying story with language-learning ideas, A Pocket Can Have a Treasure in It will hold the attention of parents and children alike.

“A likely bedtime book . . . sure to prompt kids to play the same game in their own homes.”

The Bulletin of the Center for Children’s Books, 09/08

“Will surely be appreciated by anyone reading . . . aloud to a pre-school classroom or (to) new readers.”

“The story is satisfyingly circular. [The] soft and sweet illustrations tell a story of their own. The conclusion is clear: your shelves should have this book on it!”

“A lovely circular tale . . . [that] nicely reflects the stream of consciousness, the assertions and questions of the very young . . . Frothy, ming watercolours keep time with the story.”

“What a wonderful book to read aloud to young children! Stinson has created another gem.”

A Pocket Can Have A Treasure In It

“A barn can have a horse in it…” So began the first draft of E.B. White’s Charlotte’s Web (a beginning later changed to “Where’s Pa going with that axe?”). White’s original words, however, became opening lines of Kathy Stinson’s A Pocket Can Have A Treasure In It.

A young girl living on a farm makes a series of simple but meaningful observations about the world around her. She reveals to us her discovery of how many things have hidden treasures in them. A shirt has a tummy in it and a spoon has a face in it, if we but stop, look and discover. But a special surprise is found in the wiggling blanket the girl’s parents bring home from the hospital. The best treasure, though, is found in the relationships the girl enjoys with her parents and grandmother, especially in the time the mother makes – after giving birth – to read a story to the new big sister.

This is a fun, touching and engaging story. The language is simple and spare, rhythmic and patterned – a wonderful read-aloud book. A series of questions also encourages responses from eager listeners. Deirdre Betteridge’s pastel illustrations are soft and warm, visual treasures of delight, discovery and intimacy. Throughout the illustrations, we see the unfolding of the background story, leading to the new baby’s arrival at home. One can wonder whether the young girl’s series of discoveries are inspired by her realization of the treasure found inside of Mommy.

A Pocket Can Have a Treasure in It

A little girl’s day on the farm leads her to observe all the things that are “inside” others in this delightful concept book for preschoolers. This circular story features lyrical text accompanied by charming pastel artwork.

Other titles by Deirdre Betteridge