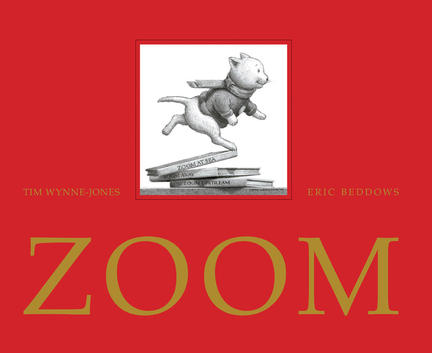 Michele Landsberg wrote of the first Zoom book, Zoom at Sea: "…the most completely satisfying Canadian picture book ever produced."

Zoom is an extraordinary cat. He loves adventure, and in this imaginative, beautifully illustrated anthology, he goes on a journey to the sea, an expedition to the North Pole and a trip to Egypt. These three classic picture books by award-winning author and illustrator duo Tim Wynne-Jones and Eric Beddows were highly praised when they were first published. Now young children can enjoy all of Zoom's amazing adventures in this handsome gift edition.

In Zoom at Sea, we learn that Zoom the cat loves water -- not to drink, but to play with. A map in the attic leads him to a beautiful woman who lives in a huge house. When, with the turn of a large wheel, mysterious Maria launches him on a wonderful sea voyage, the first of Zoom’s adventures begins. Winner of the Amelia Frances Howard-Gibbon Illustrator's Award, the Ruth Schwartz Children's Book Award, and the IODE Book Award.

In Zoom Away, it's summertime and most cats are outside chasing butterflies. But not Zoom. He's at home knitting something warm to prepare himself for his latest adventure. With the help of the beautiful Maria, Zoom sets off to the North Pole in search of his missing uncle, Captain Roy. Winner of the Amelia Frances Howard-Gibbon Illustrator's Award.

In Zoom Upstream, Zoom follows a magical passage through a bookshelf to Egypt, where he joins his friend Maria in an adventure that rivals the discovery of King Tut's tomb. Finalist for the Governor General's Award for Illustration and the Mr. Christie's Children's Illustration Award.

Eric Beddows is a renowned illustrator who has won many awards, including the Governor General's Award for The Rooster's Gift, the Amelia Frances Howard-Gibbon Award for the Zoom books, and the International Ezra Jack Keats Award bronze medal. He has also had numerous one-man shows of his artwork. He lives in Stratford, Ontario.

The award- winning drawings convey a perfect scene of mystery, intrigue, and adventure to these clever tales, and will have children yearning for more stories.

Other titles by Eric Beddows