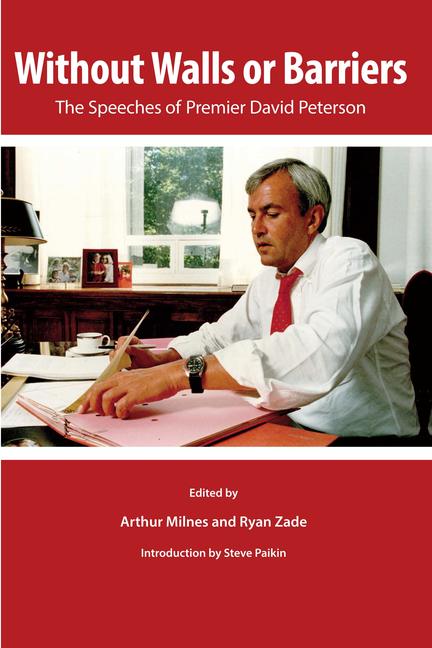 In June 1985, David Peterson was sworn in as the leader of Ontario’s first Liberal government in forty-two years. This collection of speeches explores the activist agenda the London, Ontario, lawyer pursued through his premiership, which sought to ensure all Ontarians were able to participate fully in provincial society. When Peterson was asked what he viewed as his most important accomplishment, he thought for a brief moment and then whispered with obvious emotion, “breaking down walls and barriers.”

Through his speeches, readers can see Premier Peterson on the wider Canadian stage by addressing the economic challenges faced by the federation – most notably free trade – and by supporting the Meech Lake Accord, which was designed to bring Quebec into the constitutional family. His speeches also show him on the global stage, engaged in the challenges of the transformation of world politics and Canada’s trading relationship with the United States. By the time Peterson’s premiership had come to an end in 1990, the Berlin Wall had fallen, Europe was increasingly integrated, a fragmented Soviet Union was beginning to collapse, the Canada-United States Free Trade Agreement was in full force and effect, and the age of globalization had begun.

Through this selection of speeches, the editors also present insights into a range of other figures, from former premiers and Peterson’s political contemporaries to the British royal family. Particularly powerful tributes include Nelson Mandela’s first visit to Canada and Peterson’s eulogy for MPP Dalton McGuinty, Sr, the father of Ontario’s 24th premier. TVOntario’s Steve Paikin provides an in-depth introduction that puts the life and political times of Premier Peterson and his government in broader perspective.

?Arthur Milnes is a journalist and public historian and served as a speech writer for Prime Minister Stephen Harper. He has edited volumes about the presidencies of George H.W. Bush and Jimmy Carter, and the leadership of prime ministers Sir John A. Macdonald and Sir Wilfrid Laurier, and other Canadian leaders. He also served as research assistant to the Rt. Hon. Brian Mulroney on his bestselling memoirs. Arthur lives in Kingston, Ontario.

Ryan Zade has held research, policy, educational, and management positions in the public and non-profit sector.

Other titles by Arthur Milnes

With Faith and Goodwill

The Peterson Legacy: An Examination of the Ontario Liberal Government of David Peterson, 1985-1990

The Speeches of Sir John A. Macdonald

Debating Speeches and Others

The Authentic Voice of Canada

Age of the Offered Hand