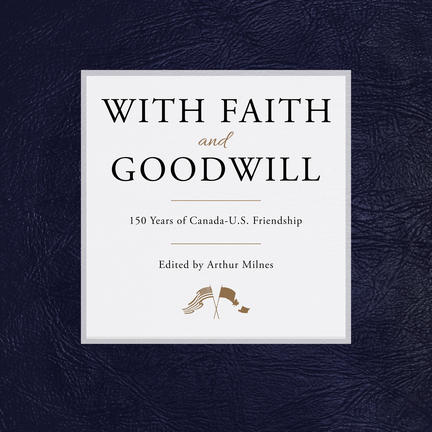 For 150 years Canada and the United States have shared something truly unique.

The countries may have the world’s longest unmilitarized border and the most prosperous free-trade arrangement in history, but what most distinguishes the Canada-U.S. relationship is neither geographic nor commercial — it’s personal. Our special relationship is the product of shared values, countless cross-border connections, and generations of combined experience. Our two countries have grown into more than just friends. We are family.

On the occasion of Canada’s 150th anniversary, With Faith and Goodwill celebrates the ups and downs, the vigour and variety of that family history by showcasing the words and images of prime ministers, presidents, and other dignitaries. From Sir John A. MacDonald to Donald J. Trump and including everyone from Tommy Douglas to Hillary Clinton, this beautifully designed collection of speeches and rarely seen photographs offers a privileged peek into the power politics of Canada-U.S. relations.

﻿Arthur Milnes is a journalist and public historian and served as a speech writer for Prime Minister Stephen Harper. He has edited volumes about the presidencies of George H.W. Bush and Jimmy Carter, and the leadership of prime ministers Sir John A. Macdonald and Sir Wilfrid Laurier, and other Canadian leaders. He also served as research assistant to the Rt. Hon. Brian Mulroney on his bestselling memoirs. Arthur lives in Kingston, Ontario.

Excerpt: With Faith and Goodwill: 150 Years of Canada-U.S. Friendship (edited by Arthur Milnes)

In the world of Canada-U.S. relations, a speech by a president to the Canadian Parliament, or one by a Canadian prime minister to the U.S. Congress is, to use sporting analogies, the World Series or Stanley Cup final of bilateral relations. It simply can’t be topped.
In 1995, shortly after President Bill Clinton spoke to Canada’s Parliament, quick-thinking and historically minded staff at the American Embassy in Ottawa produced the book United States Presidential Addresses to the Canadian Parliament: 1943–1995. In his foreword, then American Ambassador to Canada James Blanchard noted the following about these special addresses:

Presidential speeches in the House of Commons have always been a special moment in U.S.-Canadian history. Each speech powerfully captures the mood of the times. Each represents an important portrait of this, the most unique bilateral relationship in history.

When President Bill Clinton spoke to Canada’s MPs and senators, it fell to Prime Minister Jean Chrétien to introduce his counterpart. In introducing Clinton, the wily man from Shawinigan reminded Canada’s distinguished visitor that a speech to Canada’s Parliament could also bring good political luck to a president who, as with Chrétien himself, was still in his first term. As the man from Hope, Arkansas, listened intently, the prime minister observed that presidents such as Eisenhower, Reagan, and Nixon had all addressed Canada’s Parliament and were later returned to second terms at the White House. To laughter, Chrétien noted that other presidents like Ford, Carter, and George H.W. Bush had not addressed Parliament and had not received second terms.
It was a great line and very much appreciated by Clinton, who was down in the polls then. “I have never believed in the iron laws of history as much as I do now,” the president told Parliament.
The fact that later presidents like George W. Bush and Barack Obama were elected to second terms after not addressing Canada’s Parliament shows that this “law” of history can now be forgotten. Ambassador Blanchard was right in what he said, though. A presidential visit to Parliament Hill that lacks an address to Parliament may still be important and exciting, but it remains a bit of a letdown. So when, in June 2016, President Barack Obama finally took his turn behind a podium in Canada’s House of Commons to proclaim “the world needs more Canada,” the now-veteran president was met with a wave of enthusiasm.
What many observers forget, however, is that a presidential speech to Parliament actually is a relatively recent custom. Franklin Roosevelt in August 1943 was the first to address Canadian MPs and senators. And it wasn’t until 1977 that a Canadian prime minister, Pierre Trudeau, was honoured by an invitation to speak to Congress in Washington. Fans of Canada’s connection to the British monarchy will note with pride that Governor General Vincent Massey, the Queen’s representative in Canada, beat Trudeau to Congress by many years. He spoke there in 1954.
No matter the occasion, however, the persistent and perhaps even defining characteristic of the relationship between the two countries is their friendship. This is not the whole of the partnership, certainly, but it is the foundation. Unsurprisingly, then, some presidents and prime ministers have discovered over the decades that the need to work together closely on bilateral, continental, and global matters can produce a bond that becomes personal. Professional responsibilities can produce — and often have produced — friends in truly high places.

Freedom has made everything different for North America. Every generation must renew that understanding. This book reminds all of us of the important values that Canada and the United States have shared for 150 years now. May we continue as an example for the world every day that follows.

A wonderfully visual and highly readable account of the up and down relationship between neighbours bound by geography, history, and culture.

Other titles by Arthur Milnes

Without Walls or Barriers

The Speeches of Premier David Peterson

The Speeches of Sir John A. Macdonald

Debating Speeches and Others

The Authentic Voice of Canada

Age of the Offered Hand