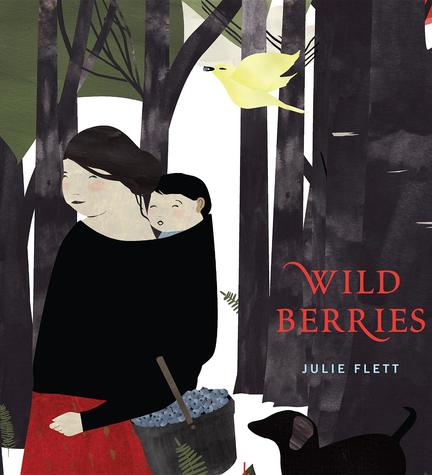 
Tch, tch, sh, sh, tup, tup.
Spend the day picking wild blueberries with Clarence and his grandmother. Meet ant, spider, and fox in a beautiful woodland andscape, the ancestral home of author and illustrator Julie Flett. This book is written in both Enlglish and Cree, in particular the n-dialect, also known as Swampy Cree from the Cumberland House area. Wild Berries is also available in the n-dialect Cree, from the Cross Lake, Norway House area, published by Simply Read Books.

Select words paired to sonorous equivalents in the Swampy Cree dialect highlight this serene picture of a blueberry-picking expedition. Since before he could walk, little Clarence has accompanied his grandma in season to a certain clearing to pick “wild berries / pikaci-m­­inísa.” Once grandma has checked for bears (“maskwak”), the two set to picking—and eating—with breaks to watch an ant (“­eník”) and other wildlife. When their buckets are full, they say “thank you / nanaskomowak” and depart—leaving a handful of berries for the birds. In the illustrations, two figures walk among tall, widely spaced tree trunks through grasses neatly drawn in single, straight brushstrokes to a clearing mottled with low berry plants. A red sun hangs in a white sky that is visually an extension of the white facing page on which the Cree, printed in red italics, draws the eye to the short, widely spaced lines of narrative. Except for a passing fox and the occasional bird, animals are depicted as silhouettes, which adds to the episode’s overall visual simplicity. Flett, an illustrator of Cree-Métis heritage, created a cultural and artistic showcase in Owls See Clearly at Night: A Michif Alphabet (2010); despite the language notes, this offering is a more general one.  A sweet commemoration of a shared experience, presented with care and infused with intimacy. (pronunciation guide, wild blueberry jam recipe) (Picture book. 5-7) - Kirkus Starred Review

In a quietly perceptive story that includes a handful of key words translated into a Cree dialect, a child accompanies his grandmother into an airy, late summer forest to pick wild blueberries. ""Grandma likes sweet blueberries ininimina, soft blueberries, juicy blueberries. Clarence likes big blueberries, sour blueberries, blueberries that go pop in his mouth."" Throughout their excursion, Clarence and his grandmother observe woodland animals, including a spider (""kokom-minakesis"") spinning its web, a fox (""makesis""), and birds (""pinesisak""). Flett (Owls See Clearly at Night), a Cree-Metis author/artist, offers loose watercolor and collage artwork that combines slate tones with red accents, including the grandmother's skirt, the birds' breasts, and a ubiquitous, low-hanging sun. Abundant white space creates a free and uncluttered landscape; the simple, concrete descriptions, reiterated through the use of Cree words (""Clarence and his grandma pick blueberries for a long time konesk""), provide a sense of composure and calm. Includes a recipe for wild blueberry jam and a pronunciation guide. Ages 4–8. (Oct.) - Publisher's Weekly
From the Vancouver-based publisher Simply Read Books, “Wild Berries,” written and illustrated by Julie Flett, tells the story of a little boy, Clarence, who picks blueberries with his grandmother. Though the “tup, tup” sound the berries make as the boy drops them into his pail may recall the “kuplink! kuplank! kuplunk!” in Robert McCloskey’s “Blueberries for Sal,” this is a very different book. Flett identifies herself as Cree-Métis (of mixed Cree Indian ancestry), and key words in her story are transliterated from the Cree “n-dialect,” printed in crimson italics. Grandma is okoma; a fox is makesis.
The illustrations have an extraordinary, austere beauty that seems to show the influence of Flett’s training in textile design. Dark tree trunks stripe across a white sky, as if appliquéd on a quilt; the color of a rowanberry-red sun (like the red flannel of old patchwork) is seen again in butterflies, birds and poppies. The ground, which is sometimes blanketed in moss green, on other pages appears embroidered with thatched rows of yellow grass. “When the buckets are full, Clarence lays a handful of berries on a leaf” as a gesture of thanks to the animals. Observant knowledge of woods and wildlife, a sense of hard-earned bounty and a respect for traditional ways make Flett’s story both specific to her background and broadly appealing. - NEW YORK TIMES
“When Clarence was little, his grandma / carried him on her back through / the woods to the clearing to pick / wild berries / pikaci-minisa. / Grandma carried a bucket and sang.” Fast-forward about five years, and now Clarence follows his grandma with his own bucket and sings along with her. Each double-page spread introduces a single line of text describing the sights and sounds of a small moment—dropping berries in a bucket (tup, tup), finding a spider web (sh, sh), observing a passing fox (rustle, rustle). Each page of text also uses one word in a dialect of Cree (the “n” dialect, known as Swampy Cree), highlighted in red font. The translated word choices are interesting in that they are not always the typical nouns and adjectives but are sometimes verbs and phrases such as long time and so many, carefully selected to enhance the rhythm of the story. The muted earth tones of the watercolor and collage illustrations in browns, grays, and reds perfectly complement the quiet tone of the story, as they offer a sense of the natural world in which Clarence is at home. A pronunciation guide and glossary of Swampy Cree words are appended.  - The Horn Book Magazine
Julie Flett’s Owls See Clearly at Night was a TimeOut New York Kids - Picture book pick

""The gorgeous, bilingual ABC book Owls See Clearly at Night: A Michif Alphabet introduces kids—and, likely, parents—to the language and culture of the Métis people of North America. Digitally enhanced silhouettes rely on a simple, striking palette that illustrates words in the Michif language, a combination of native Cree and Salteaux, plus French (a pronunciation guide at the back may or may not help with some of the tongue-twisty vocabulary). A single word may convey an entire sentence (”M” is for “Manishow,” which means “He/she is picking berries”), or be so close to English as to be almost guessable, even without the accompanying picture (”B” is for “Li Bafloo,” or “the buffalo”). If the bilingual format is a bit much for kids just learning the alphabet, poring over the images is its own reward. Look for clever details like a wolf sticking his tongue out to catch “la pwii” (rain), or the bear hiding behind a tree, hoping for a taste of “la galet” (or bannock, a type of flat bread). Field trip idea: Consider pairing a reading with a visit to the a href=""http://newyorkkids.timeout.com/venues/financial-district/6582/national-museum-of-the-american-indian"">National Museum of the American Indian.

Still This Love Goes On

My Heart Fills With Happiness / Nijiikendam

Indigenous writers, artists, and scholars recommend some of their essential reads.

A conversation about holey socks, wallpaper patterns, big suns, and all the exciting things happening in First Nations children's literature in Canada …