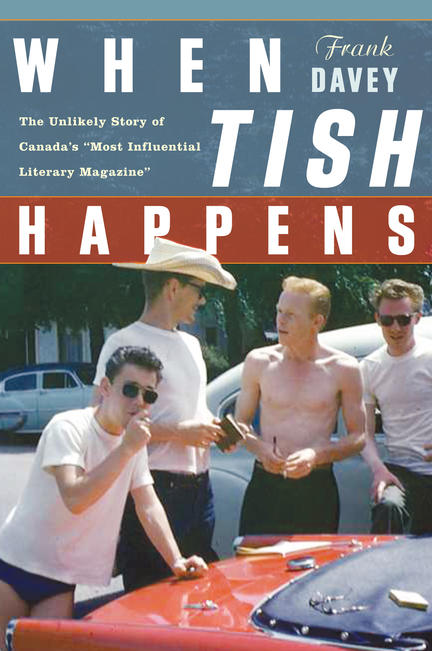 ?In the early 1960s, a group of students at UBC started a magazine called Tish. The name was purposefully an anagram of shit, in order to demonstrate their youthful and iconoclastic attitude. In many ways, Tish, and its editors, became the clear break from older Canadian poets and styles. At the heart of the magazine, and the “movement,” was Frank Davey. And it is Davey who has written this definitive history.

Davey has organized the material as a memoir, starting from his own early days in Abbotsford, B.C., and gradually introducing the other poets, including George Bowering, Daphne Marlatt, and Fred Wah, despite the fact that Davey doesn’t meet them until they all arrive at UBC. Much of the theory of the Tish poets derives from the Black Mountain poets, an American movement that incorporated the writings of Charles Olson, Robert Creeley, and Robert Duncan — who suggested the name itself. The Black Mountain poets believed that writing should be locally based and should grow out of the author’s own breathing patterns. The more specific to a locale, the better.

The poets are introduced as characters in a play, and when Fred Wah says, “Let’s start a magazine,” things happen. The first 19 issues became the calling card for a new type of poetry, but inevitably the writers began to go their own way. It is Davey’s commitment that holds the group together, despite their geographical separation.

The Tish movement provided the impetus to create a new, more contemporary Canadian poetry. And here, Frank Davey reveals how it started, grew, and became a lasting force.

Sometimes I wonder whether Tish would have happened, or at least happened in the various precise ways it is said to have happened, had Tony Friedson not urged Daphne Buckle to attend the Writers Workshop in the fall of 1960, and had I not so intemperately pursued her. The “Projective Verse” party Bill and I held that January, with Lionel’s quickly legendary visit to the emergency ward, did sharply raise the profile of Olson’s essay within our circle of UBC student writers, even if it didn’t sharply increase its understanding— and made more likely Warren’s offer to hold Sunday meetings later that spring. I would not have been the same person at those meetings, or at the Duncan lectures that followed—if they had followed— without the long conversations Daphne and I had about poetics or my discovery while writing so intensely “for” her that I was a poet. I should thank her—I know I never have. Perhaps the Tish community, such as it is, should thank her. For me, my choice of genre when first hearing that she was about to join the Workshop turned out to be crucial. Before that week I had seen myself almost equally as a possible fiction writer, playwright and poet. When the founding of a poetry magazine happened, I might have hung back like fiction-writer Gladys or playwright-to-be Carol Johnson.

That is, I can’t separate in my own mind my attraction to Daphne from the appearance of the Allen anthology, the enormous local interest in Olson’s “Projective Verse,” Duncan’s lectures and the founding of Tish. Without her there would have at least been very few Bowering–Davey twin-poem pages in Tish, no Tishbook titled D-Day and After (with its audaciously punning epigraph from Hopkins, “Buckle! AND the fire that breaks from thee then”), no Contact Press book titled “bridge force.” The bridge of that series—prominent in the twin-poems and in those two books— was in part the Lions Gate Bridge over which I had driven to North Vancouver and Daphne’s home, and in part the attempted bridge of my desire. The “bridge force” series had come about through my efforts to follow Duncan’s advice to cease self-expression and instead explore and follow the images that one’s field of experience was proposing, to move from personal plaint toward attention to the objects and histories one lived among. Among as Fred would write. Without Daphne I might never have felt the need to make that effort. One of the first things I read after that March of 1961, and before the Tallman Sunday meetings began, was Durrell’s Justine, and then Balthazar, Mountolive and Clea. I was on much too familiar ground while reading Justine, and then read Balthazar’s “interlinear” with enormous relief—because it demonstrated that if one could expand what one knew, alternate readings of one’s own life would become possible. Mountolive and Clea further expanded the quartet’s perspectives and dismantled the initial novel’s romantic claustrophobia. There was a way out, and onward.

So that Hopkins epigraph—which no critic has ever attempted to read—is not perhaps all that outrageous—the “thee” that was the humbled falcon/Christ in Hopkins’s poem could be me, the “fire” could be the poems I contributed to Tish, “Buckle” does operate satisfactorily as both a noun and a verb, the line could be speaking of Duncan’s move from “path poem” to “field poem.” It even could be read as a gloss on how Justine was “buckled” into the splendour, and wisdom, of the full quartet. Interestingly, Hopkins’s “The Windhover” would be a poem that also otherwise haunted the Tish poets. Both Bowering and Dawson would greet people around the Tish office with a “Hi there, in your riding” or a “Hi there, in your riding of the rolling” or a “Hi there, in your riding of the rolling level underneath you.” I, of course, would never stoop to such puns.