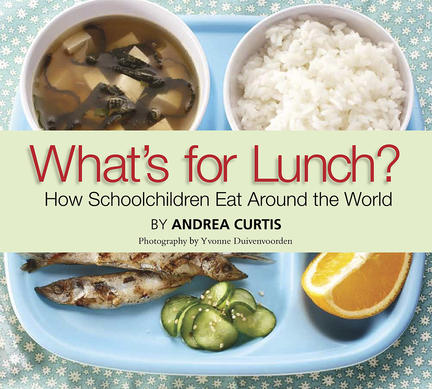 Whether their school is under a banyan tree, in a dusty tent held up with poles or in a sturdy brick structure in the heart of a bustling city, all children need a healthy lunch to be able to learn and grow. Good food nourishes both our bodies and our brains. It's one of the basic building blocks of life.

As the world has become more interconnected, what we eat has become part of a huge global system. Food is now the biggest industry on Earth. Growing it, processing it, transporting it and selling it have a major impact on people and the planet. Unpack a school lunch, and you'll discover that food is connected to issues that matter to everyone and everything such as climate change, health and inequality.

In What's For Lunch Andrea Curtis reveals the variety and inequality to be found in the food consumed by young people in typical school lunches from thirteen countries around the world, including Japan, Kenya, Russia, United States and Canada, Mexico, Brazil, and Afghanistan. In some countries, the meals are nutritious and well-balanced. In others they barely satisfy basic nutrition standards.

The book includes graphic colour photos of each of the lunches described, and stimulating sidebars that deal with various global food issues. It also provides messages for parents, teachers and kids about the significance of food, and more significantly, a list of ways in which children can reclaim school lunches for themselves by insisting on healthy, nutritious food.

Andrea Curtis is an author of books for children and adults. Her children’s non-fiction titles include Eat This!, which received starred reviews from Kirkus and School Library Journal, and What’s for Lunch?, named to VOYA’s Honor list. She has also written the young adult novel Big Water. Her adult books include Into the Blue, winner of the Edna Staebler Award for Creative Nonfiction, and The Stop, winner of the Heritage Toronto Award of Merit and a finalist for the Toronto Book Award. She has also won a number of National Magazine Awards. Andrea lives with her family in Toronto.

Photographer Yvonne Duivenvoorden grew up on a dairy farm in New Brunswick's Chaleur Bay region. Her mother often threw extra potatoes into the pot at suppertime, so that leftovers could be sliced, pan-fried and packed into Yvonne's lunch the following day. That, along with a bottle of farm fresh milk, was the best lunch she could wish for! Yvonne is now a photographer based in Toronto.

Other titles by Andrea Curtis

City Streets Are for People

The Churches of Oro-Medonte

Other titles by Yvonne Duivenvoorden

Art of the Slow Cooker