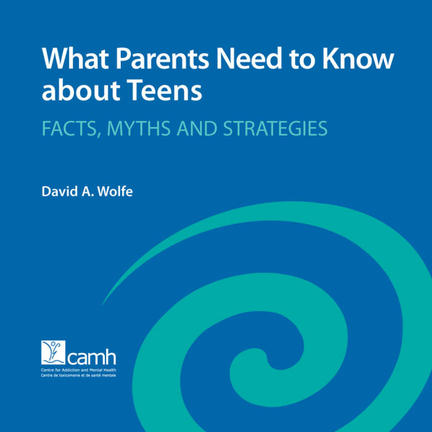 As a parent, you want practical, accurate and user friendly information to help raise your teen. You want to know what’s considered normal adolescent behaviour, how to determine whether your child is on a good path, how to encourage your teen’s healthy development, and how to get help when problems arise. What Parents Need to Know about Teens is an easy-to-read booklet that addresses these issues. Author David A. Wolfe is a clinical psychologist who has worked with children and teens for more than 25 years. He holds the RBC Chair in Children’s Mental Health at the Centre for Addiction and Mental Health. In his work, Dr. Wolfe has often encountered parents who describe feeling overwhelmed with the problems their teenage children bring home, especially when some of these difficulties didn’t exist when they were growing up themselves. This booklet is a response to parents’ concerns. Written in chatty, down-to-earth language, What Parents Need to Know about Teens addresses the facts and myths of teen life and teens’ relationships with parents. The booklet focuses on strategies to help parents prepare teens for new responsibilities and the pressures that may accompany them. Each section of the booklet is devoted to a different parenting strategy: 1 Be an effective parent: Balance sensitivity and firmness. 2 Place an emphasis on safety, responsibility and obeying rules. 3 Teach—don’t just criticize. 4 Understand your teen’s development—and how it affects your relationship. 5 Understand the pressures—and the risks—your teen faces.