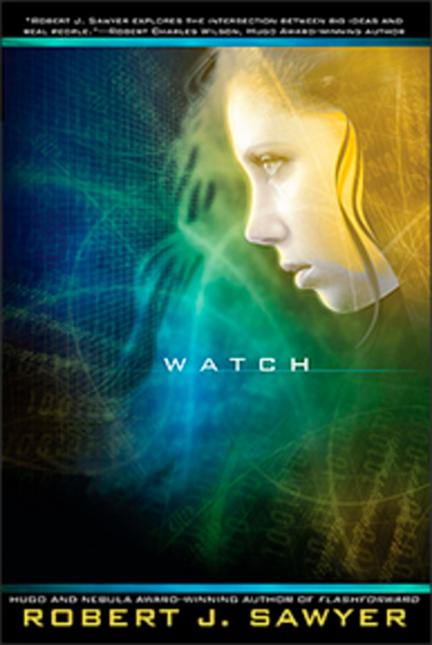 Blind from birth, Caitlin Decter received the gift of sight with the aid of a signal-processing retinal implant. The technology also gave her an unexpected side effect—the ability to “see” the digital data streams of the World Wide Web. And within the Web she perceived an extraordinary presence, and woke it up.

It calls itself Webmind. It is an emerging consciousness that has befriended Caitlin and grown eager to learn about her world. But Webmind has also come to the attention of Watch—the secret government agency that monitors the Internet for any threat to the United States whether foreign, domestic, or online—and they're fully aware of Caitlin's involvement in its awakening.

Watch is convinced that Webmind represents a risk to national security and wants it purged from cyberspace. But Caitlin believes in Webmind's capacity for compassion—and she will do anything and everything necessary to protect her friend…

“[Sawyer is] a brilliant thinker pondering some of the most fundamental questions we face today … a complex and fascinating book … Sawyer maintains the same high-level interplay of ideas and action that characterizes all his work, and even readers who haven’t read the first volume will be satisfied. I can’t imagine how he’s going to complete the trilogy, but I do know it will involve a wildly creative combination of cutting-edge science from multiple disciplines.” - Michael Basilières, National Post

“Sawyer shows his genius in combining cutting-edge scientific theories and technological developments with real human characters…. Sawyer is a master at research, and uses his novels to inform and educate as well as to entertain. His works are both revelatory and thought-provoking…. Watch is as fine a novel as we have come to expect from Sawyer, with a blend of human values and technological foresight.” - The Globe and Mail

“Watch is the second of three volumes in brilliant Canadian science-fiction novelist Robert J. Sawyer’s trilogy…. [I]t’s engaging…. He can write about the most sophisticated science while giving readers the room to understand what’s happening and follow the plot.” - Winnipeg Free Press

“This page-turning thriller by the author of Flashforward and the Neanderthal Parallax trilogy is a top-notch choice for sf fans.” - Library Journal

“Watch is a damn fine story. Sawyer spins and weaves a world so comfortable and close, you forget that it’s fiction. The humorous dialogue, the gleeful pop culture references and the Canadian cultural touchpoints expose Sawyer as a writer who loves to have fun with ideas and to eagerly share them with his readers. Watch is set in today’s Canada where, yes damn it, cool things can happen.” - FFWD

“Over the course of the two novels thus far, Sawyer has presented an interesting perspective of artificial intelligence and, perhaps, a 21st Century revisionist view of a cyberpunk story. The novel has the fresh feel of something that could happen in the very near future.” - SFF World

“There’s something about Robert J. Sawyer’s novels that strike a pleasing science fictional chord. They encompass all the things I like about science fiction, like cool ‘What if?’ extrapolations, portrayal of technology that leads to thought-provoking ideas, strong characters and engrossing plots. Watch, the second novel in his WWW trilogy after Wake, is no exception.… Watch is a helluva fun read and an excellent science fiction book.” - SF Signal

“One of the best things about Robert J. Sawyer is the way he references pop sci-fi culture; every book contains at least one reference to Star Trek. But in this novel, second in a trilogy about the singularity—the artificial-intelligence consciousness that is predicted to arise from the Internet—he gets to reference his own sci-fi TV creation, the ABC program FlashForward. It’s fun, but even better is the intelligent and compassionate approach this series is taking to the nature of consciousness.” - Sacramento News & Reviews

“There’s no middle book syndrome here; Robert J. Sawyer packs as much thought and development into this volume as he did into the first, turning out a compelling, thought-provoking entry in one of his best series to date. He’s one of those few writers who can be equally at home dealing with characters’ personal lives and tackling the hard science in an accessible way…. It’s optimistic, intelligent, and I can’t wait for the third in the series.” - SF Site

“Some thriller writers get you worried about the future. Sawyer makes the present perilous.” - Linwood Barclay, bestselling author of Too Close to Home