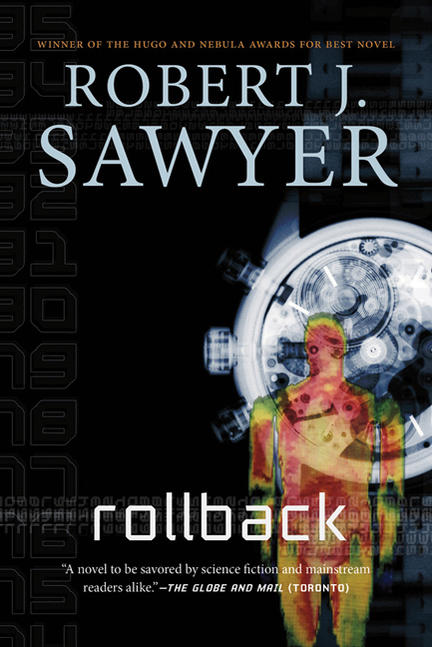 Dr. Sarah Halifax decoded the first-ever radio transmission received from aliens. Thirty-eight years later, a second message is received and Sarah, now 87, may hold the key to deciphering this one, too . . . if she lives long enough.
A wealthy industrialist offers to pay for Sarah to have a rollback--a hugely expensive experimental rejuvenation procedure. She accepts on condition that Don, her husband of sixty years, gets a rollback, too. The process works for Don, making him physically twenty-five again. But in a tragic twist, the rollback fails for Sarah, leaving her in her eighties.
While Don tries to deal with his newfound youth and the suddenly vast age gap between him and his wife, Sarah struggles to do again what she'd done once before: figure out what a signal from the stars contains. Exploring morals and ethics on both human and cosmic scales,Rollbackis the big new SF novel for 2007 by Hugo and Nebula Award-winner Robert J. Sawyer.

"Sawyer has quietly become one of our most important science-fiction writers, examining different philosophical and ethical problems that come with advancing technology. InMindscan . . .he focuses on the legal and moral ramifications involved in various definitions of humanity in an intriguing and stylistically fine story. Grade: A." --Denver Rocky Mountain News "A tale involving courtroom drama, powerful human emotion and challenging SF mystery. And Sawyer juggles it all with intelligence and far-reaching vision worthy of Isaac Asimov."--Starlog onMindscan "Sawyer lucidly explores fascinating philosophical conundrums."
-Entertainment Weekly onMindscan