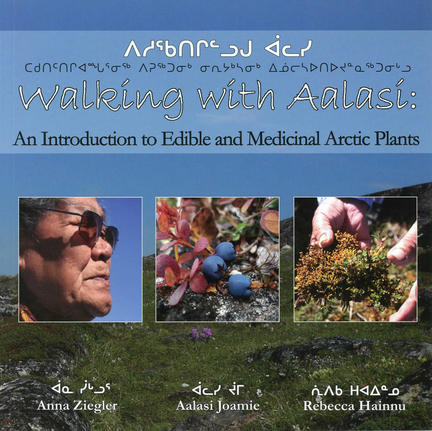 How can we know who we are, Aalasi Joamie asks, if we don't know about where we live? Having learned from her mother, Aalasi observed and harvested plants as a little girl in Pangnirtung in the 1940s and later as a mother in Niaqunngut (Apex) from the 1960s to today. In this introductory guide to traditional plant use, Aalasi shares her life learning and memories of eighteen plants commonly found around Pangnirtung, Niaqunnguuq, and across Nunavut.

Aalasi Joamie was born in Inukjuak, Quebec. Her family moved to Pangnirtung when she was a young girl. In the 1960s, she moved to Niaqunnguuq (Apex) with her husband and children into their first house. She has lived there ever since. For many years, Aalasi worked as a maternity aid at Baffin Regional Hospital. Aalasi contributed to Interviewing Inuit Elders: Perspectives on Traditional Health and she teaches traditional plant knowledge workshops at Nunavut Arctic College. She also travels to traditional plant-use conferences nationally and internationally.

Rebecca Hainnu lives in Clyde River, Nunavut, with her daughters, Katelyn and Nikita. Rebecca believes it is important to teach Inuit traditional knowledge about the land, animals, people, history, and philosophies. Her family is usually on the land throughout the seasons. She hopes to pass on some knowledge through her writing. Her work includes Edible and Medicinal Arctic Plants: An Inuit Elder’s Perspective, The Spirit of the Sea, A Walk on the Shoreline, Math Activities for Nunavut Classrooms, and Classifying Vertebrates. Rebecca is an educator in a K–12 school. She was the recipient of the 2016 NTA Award for Teaching Excellence.

Anna Ziegler is the principal of Arctic Willow Consulting, which specializes in program development and evaluation in community wellness, poverty reduction, and adult learning. She has completed graduate research on practices of archiving Inuit traditional knowledge. After living in Iqaluit, Nunavut, for fourteen years, she now resides in Ottawa, Ontario, and works on projects with groups across Inuit Nunangat. She is also the co-author, with Rebecca Hainnu and Aalasi Joamie, of Edible and Medicinal Arctic Plants: An Inuit Elder’s Perspective.

Other titles by Rebecca Hainnu

Arctic Plants: An Introduction to Edible and Medicinal Plants of the North

A Walk on the Shoreline

The Spirit of the Sea

Other titles by Anna Ziegler