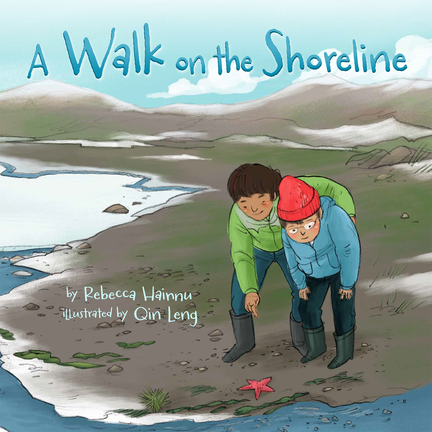 Young Nukappia can't wait to get out to his family campsite on the shoreline. After spending all year in the south with his adoptive parents, Nukappia always looks forward to his summer visits with his birth family. After spending one night in town, Nukappia and his uncle Angu begin the long walk down the shore to the family summer campsite, where all of Nukappia's cousins and aunts and uncles are waiting for him. Along the way, Nukappia learns that the shoreline is not just ice and rocks and water.
There is an entire ecosystem of plants and animals that call the shoreline home. From seaweed to clams to char to shore grasses, there is far more to see along the shoreline than Nukappia ever imagined.

Rebecca Hainnu lives in Clyde River, Nunavut, with her daughters, Katelyn and Nikita. Rebecca believes it is important to teach Inuit traditional knowledge about the land, animals, people, history, and philosophies. Her family is usually on the land throughout the seasons. She hopes to pass on some knowledge through her writing. Her work includes Edible and Medicinal Arctic Plants: An Inuit Elder’s Perspective, The Spirit of the Sea, A Walk on the Shoreline, Math Activities for Nunavut Classrooms, and Classifying Vertebrates. Rebecca is an educator in a K–12 school. She was the recipient of the 2016 NTA Award for Teaching Excellence.

“A Walk on the Shoreline is a well-researched, informative and engaging guide to the northern shoreline.”

Other titles by Rebecca Hainnu

A Walk on the Tundra

Arctic Plants: An Introduction to Edible and Medicinal Plants of the North

The Spirit of the Sea

An Introduction to Edible and Medicinal Arctic Plants