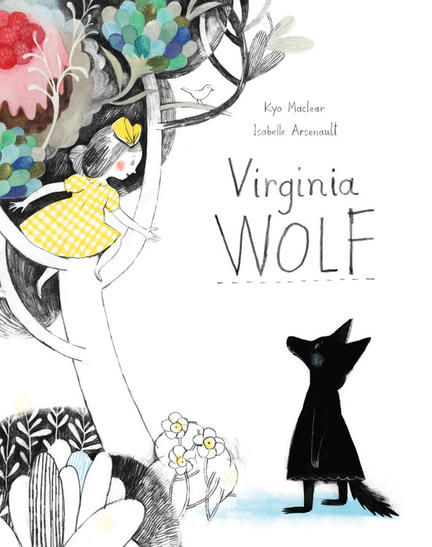 Vanessa's sister, Virginia, is in a “wolfish” mood --- growling, howling and acting very strange. It's a funk so fierce, the whole household feels topsy-turvy. Vanessa tries everything she can think of to cheer her up, but nothing seems to work. Then Virginia tells Vanessa about an imaginary, perfect place called Bloomsberry. Armed with an idea, Vanessa begins to paint Bloomsberry on the bedroom walls, transforming them into a beautiful garden complete with a ladder and swing “so that what was down could climb up.” Before long, Virginia, too, has picked up a brush and undergoes a surprising transformation of her own. Loosely based on the relationship between author Virginia Woolf and her sister, painter Vanessa Bell, Virginia Wolf is an uplifting story for readers of all ages.

KYO MACLEAR was born in London and grew up in Toronto as the only child of a foreign correspondent. Her father reported on some significant world events, including recording the first interviews with American POWs in North Vietnam. While Stray Love is entirely a work of fiction, it is informed by her experiences living with her father. Her first novel, The Letter Opener (2007), was awarded the K.M. Hunter Artists Award and shortlisted for the Amazon/Books in Canada First Novel Award. Maclear is also an award-winning visual arts writer and the author of two children’s books: Spork (2010) and Virginia Wolf (2012). Visit her online at www.kyomaclear.ca.

... an ambitious story about girlish blues, sisterly differences and the healing power of art ...—The New York Times

It's a tale to delight literary-minded adults as much as the kids they're tucking in.—The Guardian

Knowledge of Virginia Woolf and her painter-sister Vanessa Bell is unnecessary; this works beautifully as a bad-day/bad-mood or animal-transformation tale, while readers who know actual depression will find it handled with tenderly forceful aplomb.—Kirkus Reviews, Starred Review

... the book is ultimately a feel-good celebration of the power of the imagination and art to create perfect places in the world when none can be found.—Booklist

... plum for adults ... a level of literary and biographical resonance to the tale of sisterly love.—Horn Book

Vanessa's act of love is recounted with grace and sensitivity in this remarkable collaboration.—Publisher's Weekly

From the creative duo of Spork comes the imaginative tale of two sisters — one who is depressed and the other who will do whatever it takes to help her sister shake the blues. This story was inspired by British writer Virginia Woolf and her sister, painter Vanessa Bell. The real Virginia Woolf suffered through periods of depression her entire life.

The story opens with Vanessa explaining that her sister Virginia woke up in a wolfish mood. She doesn’t want Vanessa to paint her picture or to visit with any of her friends. As Maclear writes “The whole house sank. / Up became down. / Bright became dim. / Glad became gloom.” No matter what Vanessa does, she can’t pull Virginia out of her depressive state.

In a tender moment shared by the sisters, Virginia says that she might feel better if she was flying. When Vanessa asks where she would like to go, Virginia describes the perfect place — “a place with frosted cakes and beautiful flowers and excellent trees to climb...” — a place she calls Bloomsberry.

While Virginia sleeps, Vanessa comes up with a plan that she hopes will help her ailing sister. She grabs her art supplies and decides to paint Bloomsberry. Up until this moment, Arsenault’s colour palette is primarily black, grey and white with touches of red, yellow and blue. However, when Vanessa begins to paint Bloomsberry, the pages explode in colour. The effect is similar to the moment when Dorothy opens the door to reveal Munchkinland in all its Technicolor glory in the film version of The Wizard of Oz. When Virginia awakes from her sleep, she takes notice of Vanessa’s efforts and joins in helping to create Bloomsberry. At this moment “The whole house lifted. / Down became up. / Dim became bright. / Gloom became glad.”

Throughout the story, Arsenault paints Virginia as a dark silhouette of a wolf. At the end, when Virginia has recovered, the illustrator provides a visual surprise for readers.

This gentle story, hand lettered by the illustrator herself and with artwork rendered in mixed media that was digitally assembled, will introduce young readers to the topic of depression in a sensitive manner. Arsenault’s exquisite artwork is perfectly paired with Maclear’s emotionally powerful text.

One day Virginia wakes up in a wolfish mood, and when her sister Vanessa tries to cheer her up, nothing works — not even making funny faces at their brother. Finally Vanessa decides to bring the outside inside by painting trees, strange candy blossoms, green shoots and frosted cakes on the walls of their room. This is a tale that looks at depression and celebrates the transformative power of art.

Other titles by Kyo Maclear

A Story of Tangled Love and Family Secrets

If You Were a City

Other titles by Isabelle Arsenault

The Mouse Who Carried a House on His Back

Notes From a Children's Librarian: Books on Health and Wellness

Six books to appeal to the young artist.