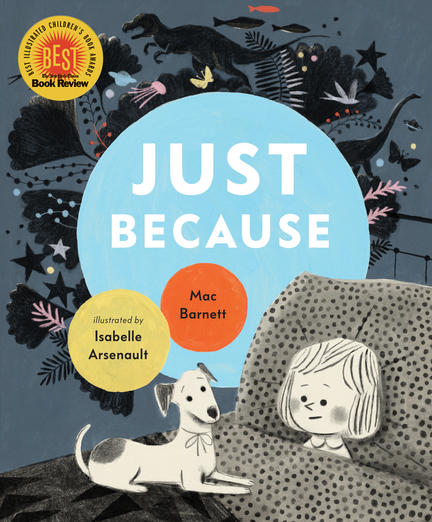 Curious minds are rewarded with curious answers in a fantastical bedtime book by Mac Barnett and Isabelle Arsenault.

Why is the ocean blue? What is the rain? What happened to the dinosaurs? It might be time for bed, but one child is too full of questions about the world to go to sleep just yet. Little ones and their parents will be charmed and delighted as a patient father offers up increasingly creative responses to his child’s nighttime wonderings. Any child who has ever asked “Why?” — and any parent who has attempted an explanation — will recognize themselves in this sweet storybook for dreamers who are looking for answers beyond “Just because.”

Mac Barnett is the author of several books for children, including Extra Yarn, illustrated by Jon Klassen, a Caldecott Honor Book and winner of a Boston Globe-Horn Book Award; The Wolf, the Duck, and the Mouse, a New York Times bestseller; and Sam and Dave Dig a Hole, a Caldecott Honor Book and winner of the E. B. White Read Aloud Award, and The Important Thing About Margaret Wise Brown. He is the co-author, with Jory John, of the New York Times bestselling series The Terrible Two. Mac lives in California.

The exacting, exquisite phrasing electrifies readers, and full-bleed illustrations pull them into an extraordinary alternate universe...Matte paper, flat colors, conventional & typesetting, and a mid-20th-century look to the light-skinned people conjure a retro feel, allowing the unexpected, original answers to stand out even more. Charming, playful, and extraordinary imaginings will galvanize young minds to find inspired answers to their own questions.
—Kirkus Reviews (starred review)

This is a clever launch pad for curious children and adults. The large trim size and double pages done in gouache, pencil, and watercolor, assembled digitally, are replete with details both realistic and fanciful.
—Booklist

Other titles by Mac Barnett

Other titles by Isabelle Arsenault

The Mouse Who Carried a House on His Back