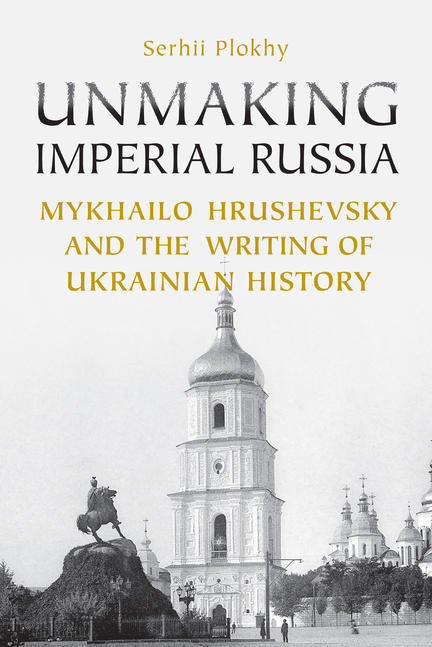 From the eighteenth century until its collapse in 1917, Imperial Russia  as distinct from Muscovite Russia before it and Soviet Russia after it  officially held that the Russian nation consisted of three branches: Great Russian, Little Russian (Ukrainian), and White Russian (Belarusian). After the 1917 revolution, this view was discredited by many leading scholars, politicians, and cultural figures, but none were more intimately involved in the dismantling of the old imperial identity and its historical narrative than the eminent Ukrainian historian Mykhailo Hrushevsky (18661934).

Hrushevsky took an active part in the work of Ukrainian scholarly, cultural, and political organizations and became the first head of the independent Ukrainian state in 1918. Serhii Plokhy's Unmaking Imperial Russia examines Hrushevsky's construction of a new historical paradigm that brought about the nationalization of the Ukrainian past and established Ukrainian history as a separate field of study. By showing how the all-Russian historical paradigm was challenged by the Ukrainian national project, Plokhy provides the indispensable background for understanding the current state of relations between Ukraine and Russia.

Serhii Plokhy is the associate director of the Peter Jacyk Centre at the Canadian Institute of Ukrainian Studies, University of Alberta. He has published extensively on Ukrainian and east European history.

'The particular strength of Plokhy's ... superbly structured, beautifully written, impeccably annotated and intellectually exciting book ... lies in the analysis of [Hrushevsky's ]historical writings. [O]nly an author to whom nineteenth- and twentieth-century Ukrainian historians such as Mykola Kostomarov, Volodymyr Antonovych, Dmytro Bahalii and Matvii Iavorsky are everyday companions is in a position to convey the nature and extent of Hrushevsky's achievement; and few such authors are to be found.'

'Serhii Plokhy is to be congratulated on producing a magisterial survey of Ukraine's "national historian" ... this is a book which matches up to the shape of Hrushevsky's work--a big and bold achievemnt.'

'Plokhy leaves no stone unturned in this most detailed intellectual biography of Hrushevsky. A major contribution to the field of Ukrainian history, this book will become a standard work on this subject.'

'Plokhy's account of Hrushevsky's role in nationalizing the past of a part of Eastern Europe into "Ukrainian history," thereby "unmaking imperial Russia," is truly, as advertised, a fine piece of scholarship. A nuanced, complex analysis that cannot be summarized in a short review…'

Other titles by Serhii Plokhy

Mykhailo Hrushevsky and the Writing of Ukrainian History

The Cossacks and Religion in Early Modern Ukraine