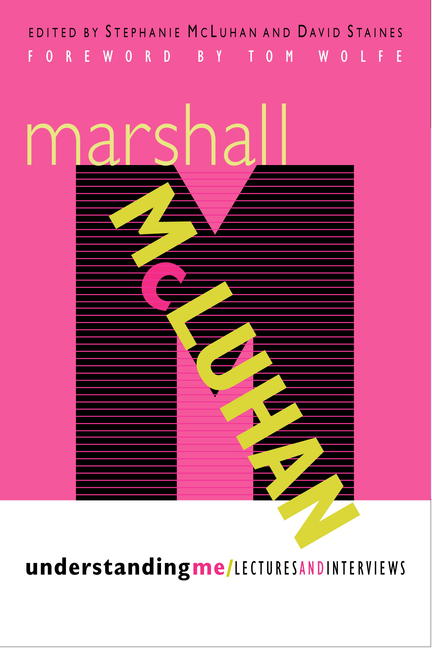 Unbuttoned McLuhan! An intimate exploration of Marshall McLuhan’s ideas in his own words
In the last twenty years of his life, Marshall McLuhan published – often in collaboration with others – a series of books that established his reputation as the pre-eminent seer of the modern age. It was McLuhan who made the distinction between “hot” and “cool” media. It was he who observed that “the medium is the message” and who tossed off dozens of other equally memorable phrases from “the global village” and “pattern recognition” to “feedback” and “iconic” imagery.

McLuhan was far more than a pithy-phrase maker, however. He foresaw – at a time when the personal computer was a teckie fantasy – that the world would be brought together by the internet. He foresaw the transformations that would be wrought by digital technology. He understood, before any of his contemporaries, the consequences of the revolution that television and the computer were bringing about. In many ways, we’re still catching up to him.

In Understanding Me, Stephanie McLuhan and David Staines have brought together eighteen previously unpublished lectures and interviews by or involving Marshall McLuhan. They have in common the informality and accessibility of the spoken word. In every case, the text is the transcript taken down from the film, audio, or video tape of the actual encounters – this is not what McLuhan wrote but what he said. The result is a revelation: the seer who often is thought of as aloof and obscure is shown to be funny, spontaneous, and easily understood.

Professor of English at the University of Ottawa, David Staines specializes in medieval literature and culture and Canadian literature and culture. In the former, he has published Tennyson’s Camelot: The Idylls of the King and Its Medieval Sources, and translated The Complete Romances of Chrétien de Troyes; in the latter, he published The Canadian Imagination: Dimensions of a Literary Culture, The Forty-Ninth and Other Parallels: Contemporary Canadian Perspectives, and The Letters of Stephen Leacock. He has also edited volumes on Morley Callaghan, Stephen Leacock and Margaret Laurence, and co-edited volumes of the writings of Northrop Frye and Marshall McLuhan. A long-time friend of Carol Shields, he wrote Carol Shields: Cultural Context, a part of Library and Archives Canada’s Web exhibition Canadian Writers.

Predicting Communication via the Internet (1966)

By the mid-1960s, McLuhan had made the world aware that television was a medium that held modern man in its thrall in profound ways that did not meet the eye, and he did this in the most old-fashioned way possible by saying it to as many people as he could.
On May 8, 1966, This Hour Has Seven Days, a Canadian Broadcasting Corporation TV public affairs program, featured McLuhan in an interview with the journalist Robert Fulford. McLuhan has the novel idea that the teenager of the mid-sixties was a far more realistic, serious, and meditative creature than the teenager of the previous generation, all because of television and its “involving” quality.
In this interview McLuhan also accurately predicts the sort of “interactive” communication that has become possible in the past decade via the Internet.
***
McLuhan: The planet is going to get a great new processing from the meteorologists and from all sorts of scientific therapists. It’s going to be put in apple-pie order so it will be nice to come home to once in a while, back to the old homestead from outer space every once in a while.

Fulford: You’ve been writing about the mass media for a good many years and now you’re an object of the mass media. How has this changed your view of it, if at all?

McLuhan: Let me instead explain why this has happened, because, if you notice, the mood of North America has suddenly changed very drastically. Things like the safety car couldn’t have happened ten years ago.

Fulford: Why is that?

McLuhan: It’s because people have suddenly become obsessed with the consequences of things. They used to be obsessed with mere products and packages and launching these things out into markets and into the public. Now they’ve suddenly become concerned about what happens when these things go out onto the highway, what happens when this kind of program gets on the air. They want safety air, safety cigarettes, safety cars, and safety programming. This need for safety is a sudden awareness that things have effects. Now my writing has for years been concerned with the effects of things, not their impact, but their consequences after impact. Unlike the fantasy world, the escape world of movies, TV creates the enormously serious and realistic-minded sort of person, well, almost Oriental in his inward meditativeness.

Fulford: This is the teenager of today?

Fulford: He’s so thoughtful and serious.

McLuhan: Yes, grim, whereas the movie generations of the twenties and thirties were a coon-coated bunch of superficial types, had a good time and went to college but not for knowledge and that sort of thing. All has changed.

Fulford: And changed because of television?

McLuhan: Very much. Television gave the old electric circuitry that was already here, gave it a huge extra push in this direction of involvement and inwardness. You see, the circuit doesn’t simply push things out for inspection. It pushes you into the circuit. It involves you. When you put a new medium into play in a given population, all their sensory life shifts a bit, sometimes shifts a lot. This changes their outlook, their attitudes, changes their feelings about studies, about school, about politics. Since TV, Canadian and British and American politics have cooled off almost to the point of rigor mortis. Our politics require much more hotting up than the TV medium will give them. TV is ideal when you get two experts like ourselves discussing TV. This is good TV because there’s a process going on of mutual challenge, discovery, and processing. Now TV is good for that, and the same with ads. If the audience can become involved in the actual process of making the ad, then it’s happy. It’s like the old quiz shows. They were great TV because it gave the audience a role, something to do. They were horrified when they discovered they’d really been left out all the time because the shows were rigged. This was a horrible mis­understanding of TV on the part of the programmers.

In the same way, most advertisers do not understand the TV medium. Do you know that most people read ads about things they already own? They don’t read things to buy them, but to feel reassured that they have already bought the right thing. In other words, they get huge information satisfaction from ads, far more than they do from the product itself. Where advertising is heading is quite simply into a world where the ad will become a substitute for the product, and all the satisfactions will be derived informationally from the ad, and the product will be merely a number in some file somewhere.

Instead of going out and buying a packaged book of which there have been five thousand copies printed, you will go to the telephone, describe your interests, your needs, your problems, and say you’re working on a history of Egyptian arithmetic. You know a bit of Sanskrit, you’re qualified in German, and you’re a good mathematician, and they say it will be right over. And they at once xerox, with the help of computers from the libraries of the world, all the latest material just for you personally, not as something to be put out on a bookshelf. They send you the package as a direct personal service. This is where we’re heading under electronic information conditions. Products increasingly are becoming services.

Other titles by David Staines

The Worlds of Carol Shields

The Idylls of the King and its Medieval Sources

My Financial Career and Other Follies