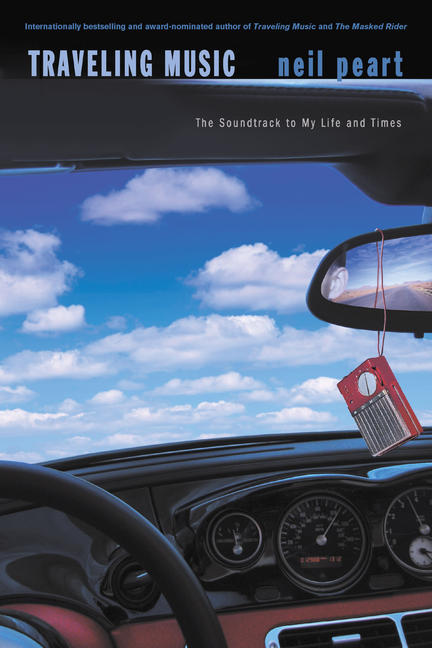 Neil Peart decided to drive his BMW Z-8 automobile from L.A. to Big Bend National Park, in Southwest Texas. As he sped along “between the gas-gulping SUVs and asthmatic Japanese compacts clumping in the left lane, and the roaring, straining semis in the right,” he acted as his own DJ, lining up the CDs chronologically and according to his possible moods.

“Not only did the music I listened to accompany my journey, but it also took me on sidetrips, through memory and fractals of associations, threads reaching back through my whole life in ways I had forgotten, or had never suspected…. Sifting through those decades and those memories, I realized that I wasn’t interested in recounting the facts of my life in purely autobiographical terms, but rather … in trying to unweave the fabric of my life and times. As one who was never much interested in looking back, because always too busy moving forward, I found that once I opened those doors to the past, I became fascinated with the times and their effect on me. The songs and the stories I had taken for granted suddenly had a resonance that had clearly echoed down the corridors of my entire life, and I felt a thrill of recognition, and the sense of a kind of adventure. A travel story, but not so much about places, but about music and memories.”

Excerpt: Traveling Music: The Soundtrack to My Life and Times (by (author) Neil Peart)

“Driving away to the east, and into the past”

The Santa Ana winds came hissing back into the Los Angeles Basin that week, breathing their hot, dry rasp through what had once been the fishing village of Santa-Monica-by-the-Sea. The streets around us were littered with dry palm fronds and eucalyptus leaves, and the view from our upstairs terrace reached the distant blue Pacific through the line of California fan palms down along Ocean Boulevard. The incoming waves battled the contrary wind, as dotted whitecaps receded clear back to the long dark shadow of Santa Catalina Island, bisected horizontally by a brownish haze of smog.

More than three hundred years ago, the Yang-Na natives called the Los Angeles Basin “the valley of the smokes,” referring to the fog trapped by those thermal inversions. And even then, wildfires sometimes raged across the savanna grasses in the dry season, creating prehistoric smog. Then and now, the air was usually clearer by the ocean, ruled and cooled by the prevailing sea breeze, but the Santa Anas invaded from inland, carrying hot desert air over the San Gabriel Mountains, through the San Fernando Valley, all the while gathering airborne irritants from the whole metropolis and driving them right through Santa Monica, and on out to Catalina.

The Cahuilla Indians believed the Santa Anas originated in a giant cave in the Mojave Desert that led directly to the lair of the Devil himself, and early Spanish arrivals picked up on that story and named those hot, dry winds the Vientos de Sanatanas, or Satan’s winds. Later arrivals to Southern California were more concerned with Christian propriety and boosting real estate values in this earthly paradise, and the Chamber of Commerce issued a press release in the early 1900s: “In the interest of community, please refer to the winds as ‘The Santa Ana Winds’ in any and all subsequent publications.”

As a recent immigrant from Canada, I had thought all that was local folklore (or just a regular day in L.A.), but I had only lived in Santa Monica for three years, and spent much of that time working with Rush in Toronto or touring in other cities. Now, though, in late March of 2003, I was feeling the effects of those abrasive winds on my sinuses, and my mood. Along with the brownish haze over the sea and my itchy nose, tension was in the air.

For one thing, there was a war on. The United States and Britain were just into the second week of the attack on Iraq, and no one knew what might happen. The smoke and mirrors of propaganda and the phantom menace of “weapons of mass destruction” had been paraded before us so much that a kind of contagious anxiety had been sown. Dire possibilities seemed to be on everyone’s mind, and in every conversation. The chance of a chemical attack on Los Angeles seemed … at least worth worrying about. When the war began, I had said to my wife, Carrie, “Let’s go to Canada,” where I still owned the house on the lake in Quebec, and still had friends and family in Toronto. However, now some mysterious disease called SARS was spreading from Asia to Canada, and people were dying, hospitals were closing, there was a travel advisory against Toronto; it was a bad scene there too.

Then there were the interior battles, and internal “travel advisories” — the “don’t go there” areas. I had some serious personal and professional issues weighing on my mind — big questions and big choices to make.

Work, for one thing. After only a couple of months at home, and spending most of 2002 on the Vapor Trails tour, and all of 2001 writing and recording that album, I felt I was just catching my breath. But plans had to be made so far in advance. Recently the band’s manager, Ray, had been entertaining (or torturing) me with various scenarios of recording and touring possibilities for the upcoming years, and I would have to give some answers soon. In 2004, the band would celebrate our thirtieth anniversary together, so we’d probably want to do something to commemorate that. A party, a cake, a fifty-city tour?

What about prose writing? With a stretch of free time ahead of me in 2003, I felt I wanted to get started on a writing project of some kind again, and friends were encouraging me to write more. But what did I want to write? (Now what?) Maybe try something different from the travel-writing style of my first two published books, The Masked Rider: Cycling in West Africa (1996) and Ghost Rider: Travels on the Healing Road (2002). Some fiction? History?

I didn’t know, but I was thinking about it.

There were a few half-finished traveling books in my files, narratives of journeys I’d taken through the early ’90s and never had the time or drive to complete: the third of my African bicycle tours, of Mali, Senegal, and the Gambia; several motorcycle explorations around Newfoundland, Mexico, and North Africa; perhaps I should look at them again. Or, back in the fateful summer of ’97, I had abandoned a narrative recounting the Rush Test for Echo tour, called American Echoes: Landscape with Drums, when my life was suddenly pulled out from under me by tragedy and loss. But I wasn’t sure I wanted to take up that story again, or any of the old ones. Something new would be good, it seemed to me.