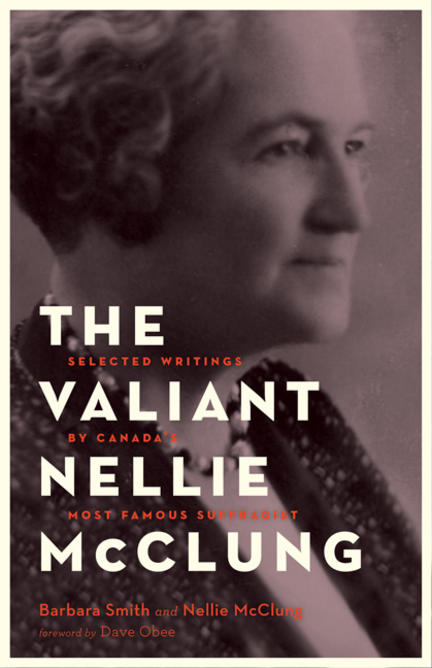 Although her name today is synonymous with the women’s suffrage movement in Canada, Nellie McClung’s long and varied career covered several fields—from social activist to elected politician, from novelist to journalist. McClung was instrumental in Canadian women gaining the right to vote before their British and American counterparts—2016 marks the one-hundred-year anniversary of women’s suffrage in Manitoba, Alberta, Saskatchewan, and British Columbia. She was also one of the Famous Five who in 1929 successfully petitioned a change in the British North America Act to include women as "persons," thereby allowing them to serve in the Senate. McClung was a household name by the time she was elected to the Legislative Assembly of Alberta in 1921, a post she held for five years.

When she settled on Vancouver Island in 1932, McClung was a highly esteemed public figure who had not only changed Canada’s political landscape and influenced women’s rights worldwide but had also raised five children and written a dozen best-selling books. From her beloved Island home, Lantern Lane, McClung continued to speak out against social injustice and inequality. In the late 1930s, she began to write a syndicated weekly newspaper column that served as social commentary for the years leading up to World War II. The Valiant Nellie McClung highlights a selection of those columns—covering themes as grave as war, as fundamental as the strength of the family unit, and as whimsical as the pleasure of gardening—and offers a unique reflection of our country’s history and an uncanny resonance today.

Barbara Smith was born and raised in Toronto and lived most of her life in Edmonton before settling in the Victoria area in 2006. Barbara is a full-time writer whose work is inspired by a love of mystery combined with her lifelong interest in social history. She has published over thirty books, twenty of which are collections of true ghost stories, including Campfire Stories of Western Canada, The Mad Trapper and perennial bestsellers Ghost Stories of Alberta, Ghost Stories and Mysterious Creatures of British Columbia, Ghost Stories of the Rocky Mountains and Canadian Ghost Stories. Barbara was also featured on the Discovery Channel's Hunt for the Mad Trapper.

Nellie McClung was one of the most important leaders in Canada's first wave of feminism and social reform. She was a member of the Women's Christian Temperance Union (WCTU) and the Women's Equity League, which were concerned with the health issues related to alcohol and the social problems facing women and children. She was also a member of the Canadian Women's Press Club and later, the Edmonton Equal Franchise league, which fought for women's rights, prohibition and factory safety legislation. In 1921, she was elected to the Legislative Assembly of Alberta and, in 1927, joined Emily Murphy, Irene Parlby, Louise Mckinney and Henrietta Edwards in their fight to have women declared "persons" under the law. Throughout the 1930s, McClung's writing career flourished with the publication of numerous newspaper articles, short stories, a novel and two memoirs. McClung was also the first woman appointed to the CBC's Board of Directors. Through her positions with the Canadian Authors' Association and Canadian Women's Press Club she was a strong promoter of women's writing and cultural nationalism. She died in 1951 in Victoria, B.C.

The Valiant Nellie McClung brings some of [McClung's] most significant writing into the public eye once again. It’s about time.

“This book, composed primarily of her writings as a daily columnist for the Victoria Daily TImes newspaper over several years, presents her thoughts, values, and perspectives on many different topics - many of which are as central today as they were during the early 20th century. … The 41 columns included offer her views on topics as diverse as neighbours and home, reading, 20th century current events, writers and writing, and equality.”

Other titles by Barbara Smith

Campfire Stories from Coast to Coast

Legendary Tales of Haunting from Coast to Coast

Other titles by Nellie McClung

Clearing in the West

Come Dance With Me In Ireland

Through the Field with Gloves Off: Short Fiction by Nellie L. McClung

by (author) Nellie McClung
edited by Marilyn I. Davis

My Sex is Ice Cream