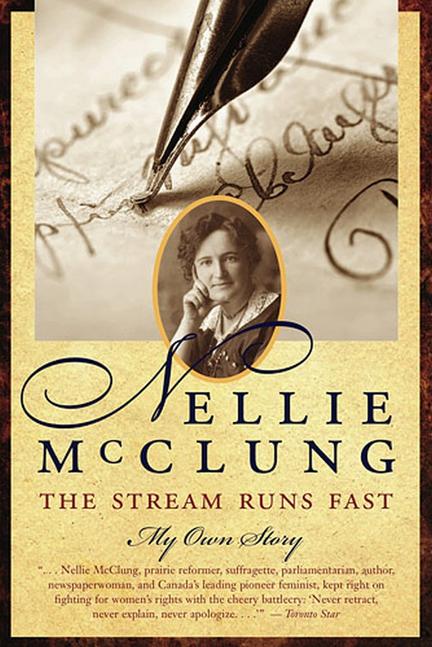 Following the reissue in 2005 of Nellie McClung's classic autobiography, Clearing in the West, comes the highly anticipated second volume, The Stream Runs Fast.

Covering McClung's later life from 1896 to 1945, The Stream Runs Fast chronicles her life during some of the most important events in Canadian history, including the First and Second World Wars and The Great Depression. It also contains her personal account of the Famous Five case in 1927, in which she sought, along with four other female activists, the right for women to be recognized as "person" under the law. This law, which allowed women to be elected to the Senate, was a major step toward the entrance of women into Canadian politics.

As one of Canada's first female political and social activists, this account of the second half of McClung's life also documents her thoughts, feelings and contributions on behalf of women, immigrants, children and the poor. In addition The Stream Runs Fast is a record of McClung's personal life throughout these years, providing a vivid and intimate portrait of life in early twentieth-century Canada.

Nellie McClung was one of the most important leaders in Canada's first wave of feminism and social reform. She was a member of the Women's Christian Temperance Union (WCTU) and the Women's Equity League, which were concerned with the health issues related to alcohol and the social problems facing women and children. She was also a member of the Canadian Women's Press Club and later, the Edmonton Equal Franchise league, which fought for women's rights, prohibition and factory safety legislation. In 1921, she was elected to the Legislative Assembly of Alberta and, in 1927, joined Emily Murphy, Irene Parlby, Louise Mckinney and Henrietta Edwards in their fight to have women declared "persons" under the law. Throughout the 1930s, McClung's writing career flourished with the publication of numerous newspaper articles, short stories, a novel and two memoirs. McClung was also the first woman appointed to the CBC's Board of Directors. Through her positions with the Canadian Authors' Association and Canadian Women's Press Club she was a strong promoter of women's writing and cultural nationalism. She died in 1951 in Victoria, B.C.

Other titles by Nellie McClung

Clearing in the West

Come Dance With Me In Ireland

Through the Field with Gloves Off: Short Fiction by Nellie L. McClung

by (author) Nellie McClung
edited by Marilyn I. Davis

My Sex is Ice Cream