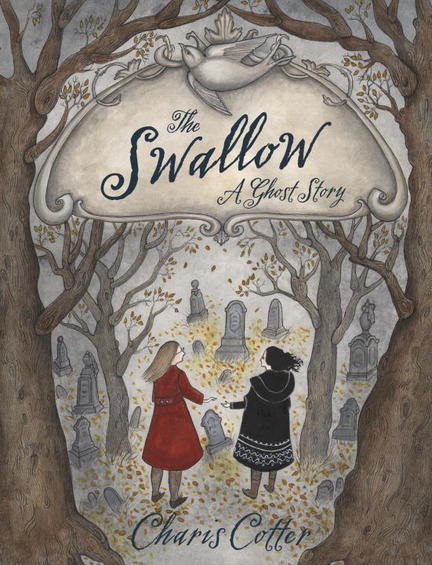 In 1960s Toronto, two girls retreat to their attics to escape the loneliness and isolation of their lives. Polly lives in a house bursting at the seams with people, while Rose is often left alone by her busy parents. Polly is a down-to-earth dreamer with a wild imagination and an obsession with ghosts; Rose is a quiet, ethereal waif with a sharp tongue. Despite their differences, both girls spend their days feeling invisible and seek solace in books and the cozy confines of their respective attics. But soon they discover they aren't alone--they're actually neighbors, sharing a wall. They develop an unlikely friendship, and Polly is ecstatic to learn that Rose can actually see and talk to ghosts. Maybe she will finally see one too! But is there more to Rose than it seems? Why does no one ever talk to her? And why does she look so... ghostly? When the girls find a tombstone with Rose's name on it in the cemetery and encounter an angry spirit in her house who seems intent on hurting Polly, they have to unravel the mystery of Rose and her strange family... before it's too late.

Selected, amazon.ca's list of Best Books of September for Children and Teens, 2014
Selected, Quill & Quire's list of Kidlit Books of the Year, 2014
“Spooky tension, friendship and compassion permeate this exquisitely plotted middle-grade ghost story .... the story structure weaves its way in and out—riveting and tumbling with tension but never obvious, leaving the readers wondering if anything is really as it seems .... readers will seesaw between chills and snorts of laughter .... Middle-grade storytelling at its very best—extraordinary.” - Starred Review, Kirkus Reviews
“The novel alternates between Polly’s and Rose’s first-person points of view, and Cotter ably creates their two distinct voices, each of which is appealing in its own way .... The Swallow is never heavy-handed, and, best of all, it’s genuinely spooky .... Like all the best ghost stories, The Swallow tells us more about the living than the dead. It is a fantastic addition to Toronto literature, with all the makings of a classic.” - Starred Review, Quill & Quire
“Set in 1960s Toronto, this title evokes an era that seems timeless .... readers seeking a good chill won’t mind. An additional purchase where middle grade ghost stories are popular.” - School Library Journal
“An unusual ghost story with a revelation that readers will long remember.” - Booklist

This is not a traditional ghost story where an entity is going around spooking everyone. No, this is about two young girls and one is a ghost. For most of the story, you believe one thing about the ghost and then all of a sudden, like a truck coming out of nowhere, the story becomes epic! Everything you thought you knew becomes something totally different and it works!
This is such an intricately told tale that had me guessing, intrigued and in awe throughout. I even got choked up a few times. Yeah, choked up during a ghost story... stop laughing.
I know so many of you will enjoy this story as much as did.