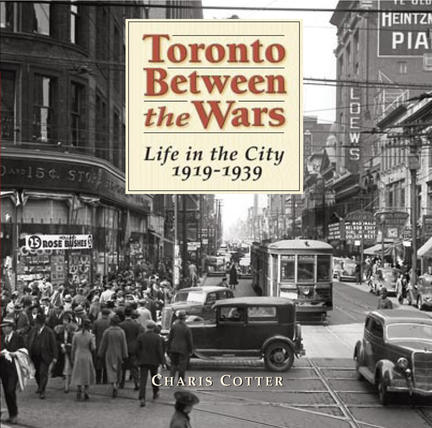 Winner of Heritage Toronto's Award of Excellence, Book category in 2005.

The pace of life in Toronto picked up after 1919 and never slowed down again. During the 1920s and '30s, Toronto went through massive changes that affected the physical and the social life of the city. In these two decades between World War I and World War II, Toronto was finding its place in the swiftly changing world of the twentieth century.

Toronto Between the Wars features 180 archival photographs of Toronto during this fascinating period. Each picture is accompanied by a captivating story about some aspect of life in the city.

During this period, cars became commonplace, the downtown skyline changed as new skyscrapers were built, and women's roles changed dramatically. Then the Depression sent the economy into a tailspin, unemployment became rampant and poverty took its toll. People struggled to afford the basic necessities and lived under the shadow of a growing threat of another war in Europe.

The text reveals little known facts, such as how a leading retail family kept their interest in a major downtown property secret for twenty years. Photographs capture unguarded moments with startling immediacy: a tired but happy group of disheveled merrymakers waiting for a bus; two women in flouncy bridesmaid dresses; an old man cleaning the statue of Queen Victoria; and children buying fish from an itinerant fishmonger.

With intriguing pictures and absorbing text, Toronto Between the Wars offers a rare opportunity to observe life in Toronto during a critical time in its history.

A handsome coffee-table volume brimming with intriguing and nostalgic photographs... informative and concise... knack for focusing on important issues.

This book is a feast for the eyes. Open it with that spirit, savour the richness of the past and you will not be disappointed.

Remarkable, fascinating photographs... The other captivating feature of this book is the inclusion of stories that spring from the images... This delightful book has a place in your family library.

Noteworthy is the quality of the photo reproductions... many of which have not been published before.

A wonderful album of photographs and pungent commentaries that capture the quintessential character and color of both the place and the era... Anyone who loves Toronto will find this book well worth browsing.