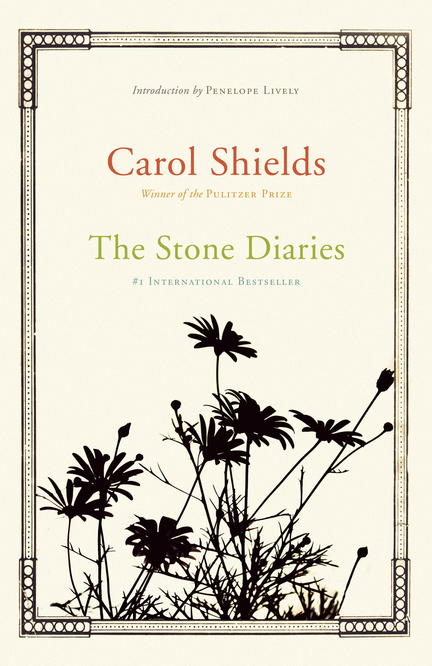 The Stone Diaries is the story of one woman's life; a truly sensuous novel that reflects and illuminates the unsettled decades of our century.

Born in 1905, Daisy Goodwill drifts through the chapters of childhood, marriage, widowhood, remarriage, motherhood and old age. Bewildered by her inability to understand her own role, Daisy attempts to find a way to tell her own story within a novel that is itself about the limitations of autobiography.

Carol Shields was born in Oak Park, Illinois, in 1935 and moved to Canada, at the age of 22, after studying at the University of Exeter in England and the University of Ottawa. She was the author of over 20 books, including plays, poetry, essays, short fiction, novels, a work of criticism on Susanna Moodie, and a biography of Jane Austen. Her 1993 novel The Stone Diaries won the Governor General's Award for Fiction, the American Book Critics' Circle Award, and the Pulitzer Prize. It was also a runner up for the Booker Prize, bringing her an international following. Larry's Party (also available from BTC Audiobooks) won England's Orange Prize, given to the best book by a woman writer in the English-speaking world. Carol Shields died in July 2003 in Victoria after a long struggle with cancer.

PENELOPE LIVELY is the author of more than twenty books of fiction and non-fiction, including Moon Tiger, which won the Booker Prize in 1987; The Road to Lichfield and According to Mark, which were shortlisted for the Booker Prize; A Stitch in Time, which won the Whitbread Award; and most recently Consequences, which was longlisted for the IMPAC Dublin Literary Award. Her work has been widely translated. She is a companion of the British Empire, a Fellow of the Royal Society of Literature, PEN, and the Society of Authors. Born in Cairo, Egypt, Lively moved to England at the age of twelve, and now lives in London.

My mother's name was Mercy Stone Goodwill. She was only thirty years old when she took sick, a boiling hot day, standing there in her back kitchen, making a Malvern pudding for her husband's supper. A cookery book lay open on the table: "Take some slices of stale bread," the recipe said, "and one pint of currants; half a pint of raspberries; four ounces of sugar; some sweet cream if available." Of course she's divided the recipe in half, there being just the two of them, and what with the scarcity of currants, and Cuyler (my father) being a dainty eater. A pick-and-nibble fellow, she calls him, able to take his food or leave it.

It shames her how little the man eats, diddling his spoon around in his dish, perhaps raising his eyes once or twice to send her one of his shy, appreciative glances across the table, but never taking a second helping, just leaving it all for her to finish up -- pulling his hand through the air with that dreamy gesture of his that urges her on. And smiling all the while, his daft tender-faced look. What did food mean to a working man like himself? A bother, a distraction, perhaps even a kind of price that had to be paid in order to remain upright and breathing.

Well, it was a different story for her, for my mother. Eating was as close to heaven as my mother ever came. (In our day we have a name for a passion as disordered as hers.)

And almost as heavenly as eating was the making -- how she gloried in it! Every last body on this earth has a particular notion of paradise, and this was hers, standing in the murderously hot back kitchen of her own house, concocting and contriving, leaning forward and squinting at the fine print of the cookery book, a clean wooden spoon in hand.

It's something to see, the way she concentrates, her hot, busy face, the way she thrills to see the dish take form as she pours the stewed fruit into the fancy mold, pressing the thickly cut bread down over the oozing juices, feeling it soften and absorb bit by bit a raspberry redness. Malvern pudding; she loves the words too, and feels them dissolve on her tongue like a sugary wafer, her tongue itself grown waferlike and sweet. Like an artist -- years later this form of artistry is perfectly clear to me -- she stirs and arranges and draws in her brooding lower lip. Such a dish this will be. A warm sponge soaking up color. (Mrs. Flett next door let her have some currants off her bush; the raspberries she's found herself along the roadside south of the village, even though it half kills her, a woman of her size walking out in the heat of the day.)

She sprinkles on extra sugar, one spoonful, then another, then takes the spoon to her mouth, the rough crystals that keep her alert. It is three o'clock -- a hot July afternoon in the middle of Manitoba, in the middle of the Dominion of Canada. The parlor clock (adamantine finish, gilded feet, a wedding present from her husband's family, the Goodwills of Stonewall Township) has just struck the hour. Cuyler will be home from the quarry at five sharp; he will have himself a good cheerful wash at the kitchen basin, and by half-past five the two of them will sit down at the table - this very table, only spread with a clean cloth, every second day a clean cloth -- and eat their supper. Which for the most part will be a silent meal, both my parents being shy by nature, and each brought up in the belief that conversing and eating are different functions, occupying separate trenches of time. Tonight they will partake of cold corned beef with a spoonful of homemade relish, some dressed potatoes at the side, cups of sweet tea, and then this fine pudding. His eyes will widen; my father, Cuyler Goodwill, aged twenty-eight, two years married, will never in his life have tasted Malvern pudding. (That's what she's preparing for -- his stunned and mild look of confusion, that tender, grateful male mouth dropping open in surprise. It's the least she can do, surprise him like this.) She sets a flower-patterned plate carefully on top of the pudding and weights it down with a stone.

"Carol Shields has explored the mysteries of life with abandon, taking unusual risks along the way. The Stone Diaries reminds us again why literature matters."
—The New York Times Book Review
"Shields's storytelling is at its most ambitious and compelling."
—The Toronto Star
"A beautiful, darkly ironic novel of misunderstanding and missed opportunites."
—Esquire

"A wise and unusual novel that makes the ordinary extraordinary...Shields reveals the mysteries of love, culture and spirituality shimmering beneath the surface of a quiet woman’s life."
—Elle

Other titles by Carol Shields

The Collected Poetry of Carol Shields

Life in the Clearings versus the Bush

The Collected Stories of Carol Shields

More of What We Aren't Told

Thirteen Hands And Other Plays

Dressing Up for the Carnival

Other titles by Penelope Lively

On a Personal Note

Pages from the Past (by Ami McKay)

Be Transported with Historical Fiction

A recommended reading list by Cathy Marie Buchanan, whose new novel is Daughter of Black Lake.

"All of us are better when we're loved."

"Last Impressions will make you laugh out loud and cry out loud. What more could be asked of a book?" —Miriam Toews