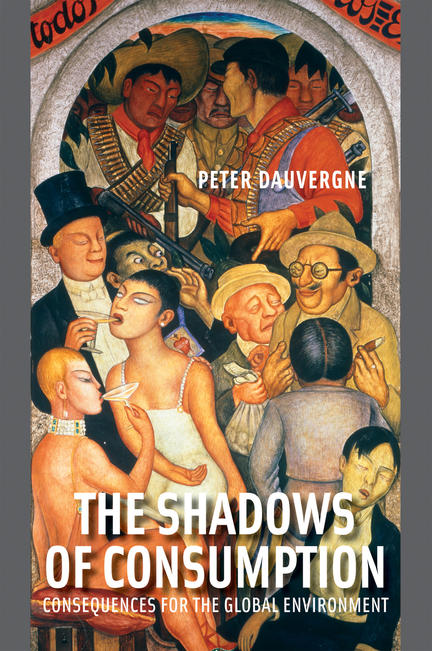 An environmentalist maps the hidden costs of overconsumption in a globalized world by tracing the environmental consequences of five commodities.

The Shadows of Consumption gives a hard-hitting diagnosis: many of the earth's ecosystems and billions of its people are at risk from the consequences of rising consumption. Products ranging from cars to hamburgers offer conveniences and pleasures; but, as Peter Dauvergne makes clear, global political and economic processes displace the real costs of consumer goods into distant ecosystems, communities, and timelines, tipping into crisis people and places without the power to resist. In The Shadows of Consumption, Peter Dauvergne maps the costs of consumption that remain hidden in the shadows cast by globalized corporations, trade, and finance. Dauvergne traces the environmental consequences of five commodities: automobiles, gasoline, refrigerators, beef, and harp seals. In these fascinating histories we learn, for example, that American officials ignored warnings about the dangers of lead in gasoline in the 1920s; why China is now a leading producer of CFC-free refrigerators; and how activists were able to stop Canada's commercial seal hunt in the 1980s (but are unable to do so now). Dauvergne's innovative analysis allows us to see why so many efforts to manage the global environment are failing even as environmentalism is slowly strengthening. He proposes a guiding principle of “balanced consumption” for both consumers and corporations. We know that we can make things better by driving a high-mileage car, eating locally grown food, and buying energy-efficient appliances; but these improvements are incremental, local, and insufficient. More crucial than our individual efforts to reuse and recycle will be reforms in the global political economy to reduce the inequalities of consumption and correct the imbalance between growing economies and environmental sustainability.

Peter Dauvergne is Professor of International Relations at the University of British Columbia. He is the author of The Shadows of Consumption: Consequences for the Global Environment and Eco-Business: A Big-Brand Takeover of Sustainability (with Jane Lister), both published by the MIT Press.

Dauvergne's brilliant investigation will show you the 'other side' of the coin and that we must all incorporate a deeper awareness and take the 'long view' into our efforts to make a positive difference for human well-being near and far—immediately in your neighborhood and incrementally on the other side of the planet.—Scott D. Wright, Human Ecology Review—

Other titles by Peter Dauvergne

AI in the Wild

Sustainability in the Age of Artificial Intelligence

Environmentalism of the Rich

A Big-Brand Takeover of Sustainability

The Political Economy of the Global Environment