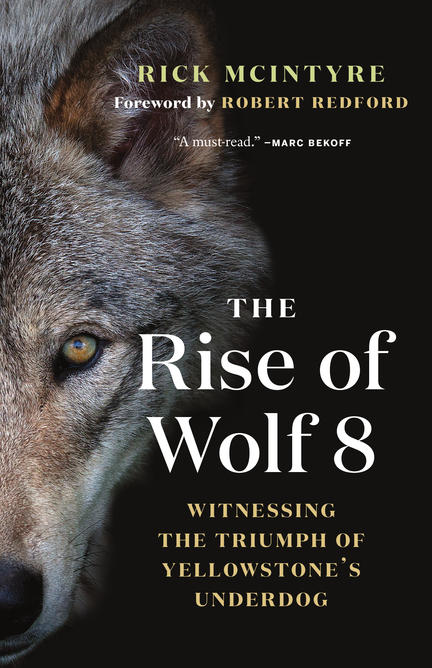 “The powerful origin story of one of Yellowstone’s greatest and most famous wolves.”
—Washington Post

Book One in The Alpha Wolves of Yellowstone Series.

Book Two, The Reign of Wolf 21, is available now.

Yellowstone National Park was once home to an abundance of wild wolves—but park rangers killed the last of their kind in the 1920s. Decades later, the rangers brought them back, with the first wolves arriving from Canada in 1995.

This is the incredible true story of one of those wolves.

Wolf 8 struggles at first—he is smaller than the other pups, and often bullied—but soon he bonds with an alpha female whose mate was shot. An unusually young alpha male, barely a teenager in human years, Wolf 8 rises to the occasion, hunting skillfully, and even defending his family from the wolf who killed his father. But soon he faces a new opponent: his adopted son, who mates with a violent alpha female. Can Wolf 8 protect his valley without harming his protégé?

“[The Rise of Wolf 8] is a goldmine for information on all aspects of wolf behavior and clearly shows they are clever, smart, and emotional beings.”
—Marc Bekoff, Psychology Today

An Amazon.com Best Science Book of 2019!

“[McIntyre's] greatest strength is the quiet respect and wonder with which he regards his subjects, a quality clearly informed by decades of careful watching."
—Publishers Weekly

“Rick's book [The Rise of Wolf 8] is a goldmine for information on all aspects of wolf behavior and clearly shows they are clever, smart, and emotional beings."
—Psychology Today

“The main attraction of this book, though, is the storytelling about individual wolves, including the powerful origin story of one of Yellowstone’s greatest and most famous wolves."
—Washington Post

“Yellowstone’s resident wolf guru Rick McIntyre has been many things to many people: an expert tracker for the park’s biologists, an indefatigable roadside interpreter for visitors, and an invaluable consultant to countless chronicles of the park’s wolves—including my own. But he is first and foremost a storyteller whose encyclopedic knowledge of Yellowstone’s wolf reintroduction project—now in its 25th year—is unparalleled.”
—Nate Blakeslee, New York Times bestselling author of American Wolf

Other titles by Rick McIntyre

The Reign of Wolf 21

Other titles by Robert Redford

Caribou and the North