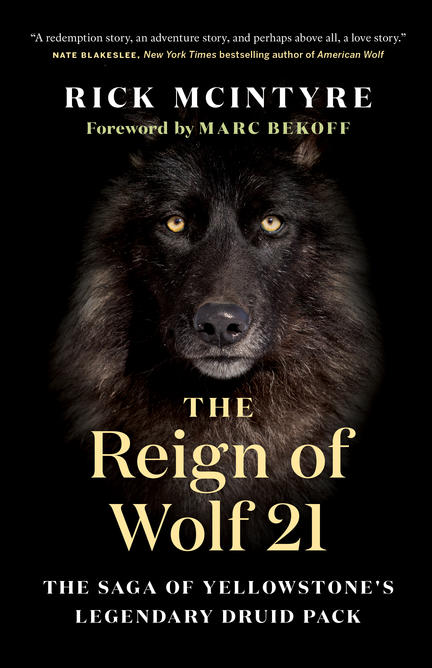 “A redemption story, an adventure story, and perhaps above all, a love story.”—Nate Blakeslee, New York Times-bestselling author of American Wolf

The Druid Peak Pack was the most famous wolf pack in Yellowstone National Park, and maybe even in the world.

This is the dramatic true story of its remarkable leader, Wolf 21—whose compassion and loyalty challenges commonly held beliefs about alpha males.

In this compelling follow-up to the national bestseller The Rise of Wolf 8, Rick McIntyre profiles one of Yellowstone’s most revered alpha males, Wolf 21. Leader of the Druid Peak Pack, Wolf 21 was known for his unwavering bravery, his unusual benevolence (unlike other alphas, he never killed defeated rival males), and his fierce commitment to his mate, the formidable Wolf 42.

Wolf 21 and Wolf 42 were attracted to each other the moment they met—but Wolf 42’s jealous sister interfered viciously in their relationship. After an explosive insurrection within the pack, the two wolves came together at last as leaders of the Druid Peak Pack, which dominated the park for more than 10 years.

McIntyre recounts the pack’s fascinating saga with compassion and a keen eye for detail, drawing on his many years of experience observing Yellowstone wolves in the wild. His outstanding work of science writing offers unparalleled insight into wolf behavior and Yellowstone’s famed wolf reintroduction project. It also offers a love story for the ages.

“Like Thomas McNamee, David Mech, Barry Lopez, and other literary naturalists with an interest in wolf behavior, McIntyre writes with both elegance and flair, making complex biology and ethology a pleasure to read. Fans of wild wolves will eat this one up.”—Kirkus starred review

RICK MCINTYRE has spent more than 40 years watching wolves in America’s national parks, 25 of those years in Yellowstone, where he has accumulated over 100,000 wolf sightings and educated the public about the park’s most famous wolves. He has spoken about the Yellowstone wolves with 60 Minutes, NPR, and CBC, and he is profiled extensively in Nate Blakeslee’s American Wolf and in international publications. He lives in Silver Gate, Montana.

MARC BEKOFF is professor emeritus of ecology and evolutionary biology at the University of Colorado, Boulder, and co-founder with Jane Goodall of Ethologists for the Ethical Treatment of Animals.

“McIntyre’s stories of mutual aid among the wolves will remind us that all life is poised in an ever-shifting dance of competition and co-operation. We can all learn some lessons from McIntyre’s beloved beasts.”
—The Vancouver Sun

“Like Thomas McNamee, David Mech, Barry Lopez, and other literary naturalists with an interest in wolf behavior, McIntyre writes with both elegance and flair, making complex biology and ethology a pleasure to read. Fans of wild wolves will eat this one up.”
—Kirkus starred review

“Like Darwin, McIntyre is an inclusionist and is thus able to enter the hearts and minds of wolves, providing us with a consummately rounded picture of their lives. Along the way, he creates a fully realized world that stands whole and sublime alongside our far more troubled human one.”
—Mountain Journal

“Wolves have always been majestic creatures, and The Reign of Wolf 21 [...] beautifully illustrates this. [G]reat for nature lovers or people interested in learning more about wolves and wolf behavior.”
—The Yakima Herald

“A gripping tale of triumph and loss told with an unsurpassed appreciation for the wolves of Yellowstone and the natural world they inhabit.”
—Bernd Heinrich, professor emeritus of biology at the University of Vermont and author of Mind of the Raven

“I’m always eager for the next book by Rick McIntyre. I learn so much fascinating information about wolves and their interactions with each other and with their prey.”
—L. David Mech, author of The Wolf: Ecology and Behavior of an Endangered Species, now in its 50th year in print

“It is the way [Rick McIntyre] sees wolves—as fellow social beings with stories to share—that makes his books so powerful.”
—Ed Bangs, former US Fish and Wildlife Service wolf recovery coordinator for the Northern Rockies

“Rick is constantly collecting information—from his own observations and those made by others. He is a researcher to the bone and an amazing witness to the wolves’ incredible stories.”
—Scott Frazier, Crow/Santee, director of Project Indigenous

“In his second book on Yellowstone wolves, Rick McIntyre provides a riveting history about a powerful dynasty, a wolf pack called the Druids. There were palace revolutions, despotic leaders, and interlopers to contend with, overlaying the incredible daily challenge of making a living with just teeth and feet. Life begets life, and this fascinating story is dominated by the overwhelming strength of family bonds, bravery, and benevolence.”
—Rolf Peterson, Michigan Technological University, author of The Wolves of Isle Royale: A Broken Balance

“Rick brilliantly weaves the dramatic life-story of wolf 21 through the intertwining of his life with the different personalities of his mate wolf 42, their sons and daughters, and members of nearby packs. As a story teller, Rick generates great compassion in the reader - a fitting antidote to the hatred and indifference that still plagues this long-persecuted species.”
—Dr. John and Mary Theberge, wildlife ecologists, wolf biologists and authors

“Wolves are possessed of an ancient and enduring wisdom. This is why old-time Indians used to spend the kind of time watching wolves that Rick has, and for the same reasons—to learn FROM them, not just ABOUT them.”
—John Potter, Anishinaabe wildlife artist

“If ever there was a ‘perfect’ wolf, it was Wolf 21. He lived an outsized life, more like an action hero than a real creature. And no one knew him better than master storyteller Rick McIntyre.”
—Carl Safina, author of Becoming Wild; How Animal Cultures Raise Families, Create Beauty, and Achieve Peace

“No wolf's life has ever been laid before us in such detail and with such rich analysis.”
—Norm Bishop, director of the Wolf Recovery Foundation and co-author of Yellowstone's Northern Range: Complexity and Change in a Wildland Ecosystem

Praise for the first book in the Alpha Wolves of Yellowstone series, The Rise of Wolf 8:

An Amazon.com Best Science Book of 2019

“[Rick McIntyre’s] greatest strength is the quiet respect and wonder with which he regards his subjects, a quality clearly informed by decades of careful watching.”
—PUBLISHERS WEEKLY

“The main attraction of [The Rise of Wolf 8] is the storytelling... including the powerful origin story of one of Yellowstone’s greatest and most famous wolves.”
—WASHINGTON POST

“McIntyre is a gifted and fluent storyteller... His book will make readers reconsider negative images of the wolf.”
—VANCOUVER SUN

Other titles by Rick McIntyre

The Rise of Wolf 8

Witnessing the Triumph of Yellowstone's Underdog

Other titles by Marc Bekoff

A New Era for Wolves and People