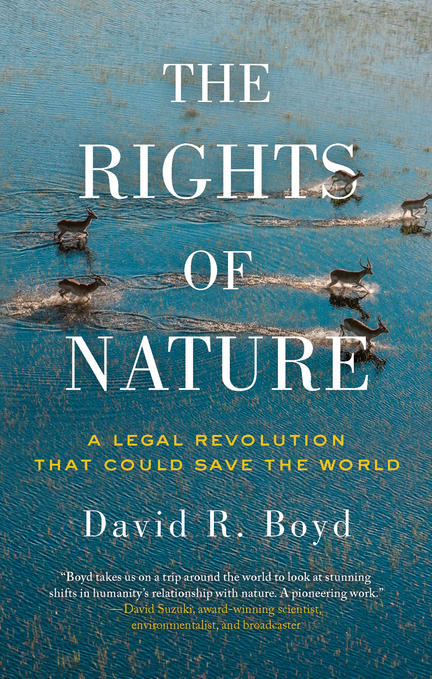 Winner of the Green Prize for Sustainable Literature

A growing body of law around the world supports the idea that humans are not the only species with rights; and if nature has rights, then humans have responsibilities.

Palila v Hawaii. New Zealand’s Te Urewera Act. Sierra Club v Disney. These legal phrases hardly sound like the makings of a revolution, but beyond the headlines portending environmental catastrophes, a movement of immense import has been building — in courtrooms, legislatures, and communities across the globe. Cultures and laws are transforming to provide a powerful new approach to protecting the planet and the species with whom we share it.

Lawyers from California to New York are fighting to gain legal rights for chimpanzees and killer whales, and lawmakers are ending the era of keeping these intelligent animals in captivity. In Hawaii and India, judges have recognized that endangered species — from birds to lions — have the legal right to exist. Around the world, more and more laws are being passed recognizing that ecosystems — rivers, forests, mountains, and more — have legally enforceable rights. And if nature has rights, then humans have responsibilities.

In The Rights of Nature, noted environmental lawyer David Boyd tells this remarkable story, which is, at its heart, one of humans as a species finally growing up. Read this book and your world view will be altered forever.

Dr. David R. Boyd is one of Canada’s leading experts in environmental law and policy and an adjunct professor in the School of Resource and Environmental Management at Simon Fraser University. He has advised the governments of Canada, Sweden, and Iceland on environmental and constitutional issues and is the co-chair of Vancouver’s Greenest City Action Team along with Mayor Gregor Robertson. He is a member of the IUCN’s Commission on Environmental Law, the Global Network for the Study of Human Rights and the Environment, the Forum for Leadership on Water, and the Environmental Law Alliance Worldwide (ELAW).

David Boyd is the author of several bestselling and award-winning books as well as more than a hundred publications related to environmental law and policy, including Unnatural Law: Rethinking Canadian Environmental Law and Policy and The Right to a Healthy Environment: Revitalizing Canada's Constitution. His current research focuses on the effects of enshrining environmental rights and responsibilities in national constitutions.

“Expertly written case studies in which legalese is accessibly distilled … are empowering reminders that the seemingly inevitable slide toward planetary destruction can be halted. Boyd persuasively shows that treating the law as an evolving instrument, combined with public-awareness campaigns and political pressure, can help curb humanity’s worst excesses.” — Publishers Weekly Starred Review

“Despite the heady subject matter, The Rights of Nature is a breeze to read. Boyd punctuates his chapters with case studies that illustrate how legal decisions have affected specific animals and ecosystems. It's in these pages that Boyd's work is especially affecting. Well-researched and written for the layman, this stirring look at the history and current state of environmental lawmaking demonstrates how powerful — and inspiring — legislation can be.” — Shelf Awareness for Readers

“This is a real-life legal thriller. Imagine constitutions and laws acknowledging that rivers and ecosystems have rights and cannot be owned by humans. Envision judges recognizing that sentient animals are ‘legal persons’ and should no longer be regarded as property. Leading environmental lawyer David Boyd takes us on a trip around the world to look at these stunning shifts in humanity’s relationship with nature. A pioneering work.” — David Suzuki, award-winning scientist, environmentalist, and broadcaster

“Changing our laws to better reflect that laws of nature may be the only way to save the planet. David Boyd has written a brilliant call to arms to get behind a movement whose time has (finally, thankfully) come.” — Maude Barlow, author of Boiling Point

“If there’s one that really stands out among the pack, it’s David Boyd’s The Rights of Nature: A Legal Revolution That Could Save the World. The title says it all, and those of a greenish bent should put it under the tree for any judges and lawyer on their list. They’ll never look at flora and fauna the same way again.” — The Georgia Straight

Other titles by David R. Boyd

A Prescription for Stronger Canadian Environmental Laws and Policies

Progressing Towards a Greener Future

The Right to a Healthy Environment

A Global Study of Constitutions, Human Rights, and the Environment

How to Protect Yourself from Everyday Environmental Health Hazards