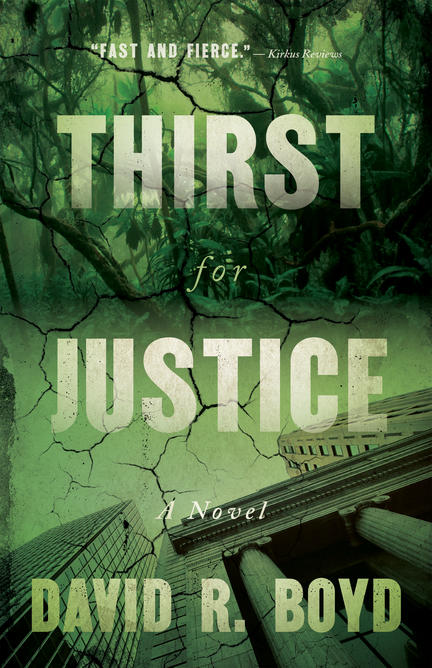 For readers of John Grisham and William Deverell comes a political thriller ripped from today’s headlines. Lawyer and environmental activist David R. Boyd writes a riveting thriller about the psychological toll of a humanitarian crisis. Filled with tension and courtroom drama, Thirst for Justice will have you questioning what you believe about right versus wrong.

Michael MacDougall is a talented trauma surgeon whose life in Seattle is slowly unraveling. Frustrated as an ER doctor and with his marriage in trouble, he volunteers with a medical aid charity in the Congo. Disconsolate at the lives he cannot save in the desperate conditions of the region, he is shattered by a roadside confrontation with the mercenary Mai Mai that results in unthinkable losses.

Back home in Seattle, he is haunted by his experiences in Africa and what he sees as society’s failure to provide humanitarian aid to those who most desperately need it. Locked in a downward spiral, he becomes obsessed with making his government listen to him and dreams up an act of terrorism to shock his nation awake.

Activist and lawyer David Boyd’s debut novel is a taut political thriller that begs the question: how far is too far when you’re seeking justice?

Dr. David R. Boyd is one of Canada’s leading experts in environmental law and policy and an adjunct professor in the School of Resource and Environmental Management at Simon Fraser University. He has advised the governments of Canada, Sweden, and Iceland on environmental and constitutional issues and is the co-chair of Vancouver’s Greenest City Action Team along with Mayor Gregor Robertson. He is a member of the IUCN’s Commission on Environmental Law, the Global Network for the Study of Human Rights and the Environment, the Forum for Leadership on Water, and the Environmental Law Alliance Worldwide (ELAW).

David Boyd is the author of several bestselling and award-winning books as well as more than a hundred publications related to environmental law and policy, including Unnatural Law: Rethinking Canadian Environmental Law and Policy and The Right to a Healthy Environment: Revitalizing Canada's Constitution. His current research focuses on the effects of enshrining environmental rights and responsibilities in national constitutions.

Michael took a deep breath before turning to his next patient. She was the size of a two-year-old American toddler, although her head was disproportionately large. Big brown eyes, but vacant. Skin stretched over bones. Legs like two sticks hinged, with a golf ball in the middle. He looked at the chart. Kapinga Kabobo was seven years old. Nineteen pounds. She should have weighed at least forty. The latest cholera outbreak had tripled the number of people seeking medical attention at the International Medical Assistance Foundation field hospital in Goma.

Michael had quickly become a staff favorite, his quiet confidence and warmth revealed in a broad smile and the crow’s feet at the corners of his eyes. He opened the girl’s mouth gently and used a tongue depressor to take a quick look. “Let’s get this girl on a rehydration program. If she can’t swallow, then use intravenous glucose and electrolytes.” Perhaps startled by the foreign sound of Michael’s voice, the girl defecated onto the dirt floor of the medical tent. The watery diarrhea contained flecks of mucous and epithelial cells the size of rice grains, a telltale sign of cholera.

“We also need some metronidazole. Add it to the IV drip please.” He scrawled instructions onto the chart.

The girl’s listless eyes fluttered and closed. She was fading fast.

“Come on, sweetheart, don’t give up on us now,” Michael pleaded, unwilling to admit that she was probably too far gone. He checked her pulse. Rapid, way faster than it should have been. He took her blood pressure. Low and falling. There was nothing he could do. He held her hand and stroked her cheek, trying to offer some small comfort as he heard the last, rattling breath. Biting back grief and frustration, Michael closed her eyes. Back in Seattle he could have saved her life. Then again, back in the U.S. he’d never seen a case of cholera and probably never would.

He knew that it wasn’t really the disease that had killed her. It was the fact that she had no clean water to drink, and no latrine for going to the bathroom. There were no parents or other relatives to notify; the girl was an orphan and a refugee. Michael would fill out the death certificate later. There were living, breathing, laughing, crying children needing his help.

“Fast and fierce, fueled by a knowledge of the legal system that’s equally energizing and disheartening.” — Kirkus Reviews

“Part thriller, part political commentary, and part courtroom drama, this novel will stick with the reader long after the final page.” — Publishers Weekly

“A fast-moving and well-researched political thriller, Thirst for Justice tracks the tidal wave of consequences as one man’s desperate ploy to save the world turns into a struggle to save himself.” — Patrick Tarr, writer/executive producer of the CTV drama, Cardinal

“If you are collecting Canadian mystery authors, or environmental thrillers, Thirst for Justice belongs on your shelf.” — Kingdom Books

Other titles by David R. Boyd

The Rights of Nature

A Legal Revolution That Could Save the World

A Prescription for Stronger Canadian Environmental Laws and Policies

Progressing Towards a Greener Future

The Right to a Healthy Environment

A Global Study of Constitutions, Human Rights, and the Environment

How to Protect Yourself from Everyday Environmental Health Hazards