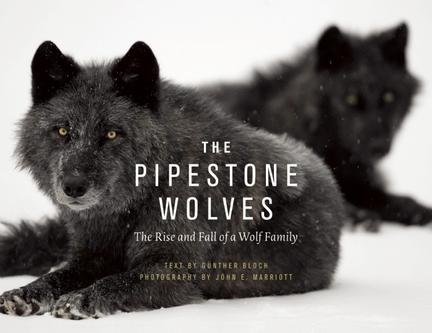 A compelling and lavishly illustrated photography book full of behavioural insights and wolf tales that will engage those interested in the state of wild wolves throughout North America.

In the winter of 2008–09, a new wolf family from the Pipestone Valley suddenly appeared in the Bow Valley of Banff National Park, taking up residence alongside a family that had ruled there for over a decade. Within a year, these new wolves had eliminated the Bow Valley wolves and established a dominance that would last for five years in the heart of Canada’s most famous national park.

As the climactic chapter in a twenty-year observational study of wolves in Banff National Park, internationally respected wolf behaviour expert Günther Bloch and widely renowned wildlife photographer John E. Marriott followed the Pipestones through the trials and tribulations of raising their family in one of the world’s most heavily visited national parks.

Bloch’s work involved patient, time-consuming observations day after day for five consecutive years, resulting in matchless ecological and behavioural insights that go beyond the usual information that comes from studying wild wolves using telemetry and radio collaring. Bloch outlines the differences between a wolf pack and a wolf family, he describes A- and B-type personalities in wolves and how this impacted survival rates of the Pipestone pups and yearlings in the Bow Valley. He also details the three societal types of wild wolves, debunking the age-old myth of a pecking order from alphas to omegas, based on what he was able to observe in person with these wild wolves.

The book chronicles not only the rise of the Pipestones and how they established and maintained dominance in the valley, but also how an increase in mass tourism in Banff led to a decrease in prey density for the Pipestones, which in turn led to the wolves changing their hunting strategies and expanding their summer range. Bloch explains how the Pipestones faced an inevitable fall from the top as pressure from eager wolf watchers increased exponentially in the park at the same time the wolves’ prey base was shrinking rapidly. Combining these influences with other factors like rail mortality and old age, Bloch and Marriott knew the end was near for the Pipestones.

The authors conclude with insights into how wolf and wildlife management in Banff National Park can improve. They outline steps Parks Canada should be taking to deal with the human management problems that are really at the core of the wildlife issues in the park. They also discuss whether we can continue to maintain a balance between ecological integrity and mass tourism in Canada’s flagship park and whether it is already too late. Have we passed the point of no return? And will our Banff wolves live forever after in a wildlife ghetto devoid of true wilderness characteristics?

Günther Bloch has observed wild wolves in Poland, Slovakia, Spain, Italy and North America. He is the author of six international bestselling books and several hundred magazine articles on wolf and dog behaviour. He has been the owner of the Canid Behaviour Center, a research facility in Germany, since 1977. In 1999 he founded the International Symposium on Canids, where scientists from around the world share the latest research findings on canid behaviour every three years. Günther first came to Canada to watch wolves in 1986. He did den-site observational research in 1993 in the Northwest Territories and studied wolf behaviour in the Bow River Valley of Banff National Park for Parks Canada from 1992–2003. He continued observing Bow Valley wolf behaviour independently from 2003–2014. Günther lives on an acreage on the south side of the Porcupine Hills in Alberta with his wife, Karin, and dogs Timber and Raissa.

John E. Marriott is one of Canada’s premier professional wildlife and nature photographers, with a career spanning two decades and images published worldwide in National Geographic, BBC Wildlife, Canadian Geographic, Maclean’s, and Reader’s Digest. He is also the wildlife photography columnist for Outdoor Photography Canada magazine. His books with RMB include The Pipestone Wolves: The Rise and Fall of a Wolf Family (with Günther Bloch), What Bears Teach Us (with Sarah Elmeligi), and The Kootenay Wolves: Five Years Following a Wild Wolf Pack. John has also produced four coffee-table books, including: Banff & Lake Louise: Images of Banff National Park, Wildlife of the Canadian Rockies: A Glimpse at Life on the Wild Side, The Canadian Rockies: Banff, Jasper & Beyond, and Tall Tales, Long Lenses: My Adventures in Photography. John prides himself on being a conservation photographer known for capturing wilderness scenes and wild, free-roaming animals in their natural habitats. John currently lives in Canmore, Alberta, with his wife, Jennifer.

Mike Gibeau is the Carnivore Specialist for Parks Canada and an Adjunct Professor in the Geography Department at the University of Calgary. He also maintains an office with the Alberta Cooperative Conservation Research Unit. Mike has extensive experience in the ecology and management of large carnivores including research on coyotes, wolves, black bears and grizzly bears, with a decade of research dedicated to investigating the impacts of human activity on grizzly bears. Much of his time is currently spent coordinating grizzly bear conservation and policy programs in the mountain National Parks. He also advises decision makers on management of large carnivores in the Canadian Rocky Mountains. Mike is not only involved in the biology of large carnivores but has a keen interest in interdisciplinary problem solving, the social context of carnivore conservation and the links between science and policy. His focus lies in applying innovative conservation measures on the ground. He has a MSc in Wildlife Biology from the University of Montana and a PhD in Conservation Biology from the University of Calgary. Mike has spent close to 30 years working in Canadian National Parks, originally as a Park Warden and now a biologist.

This book takes you on a journey from when the Pipestones arrived, and up until their eventual downfall. It is filled with behaviour that the wolves exhibited, beautifully documented by the author’s direct observations and stunningly beautiful photographs taken by John E. Marriott. It makes this a ‘must have’ for anyone who enjoys reading up on animal behaviour, and of course wolves!

Other titles by John E. Marriott

What Bears Teach Us